The hive world of Hazzard, deep in the galactic south. A friendly and hospitable place, kept prosperous by it’s trade in lethally potent liquor to keep Imperial citizens in a state of blissful stupor.. and home to the Redeemers chapter of the Space Marines.

In the depths of winter, the world celebrates Emperor’s Mass – an ancient custom venerating the day that The Emperor (referred to in ancient Terran texts as Jesus, Santa Claus and Charlie Sheen) was born. Legend has it that on the Eve of this holy day, angels of the Imperium bestow gifts on every pious boy and girl…

But this year something wicked and evil grins on the horizon – licking it’s lips at juicy prey. The vanguard of a mighty Ork invasion force, WAAAGH-BOZZHOG, has made planetfall and an elite Redeemers strike force rushes to meet it…

(yep, straight away – in retrospect neither of us can drink, wargame and add up!)

I won the deployment roll and decided for the southern edge – that allowed me to deploy the Whirlwinds straight into the ruins of the Emperor Ascendant and onto objective 3. A task group comprising the Terminators and Land Raider company would take and hold the Astropath tower (objective 8). Two detachments of the Devastator company would deploy into the town front and centre, securing objective 2, while HQ and the third (Blue) detachment would rush forward and secure objective 4. The Warlord would deploy in between with the idea of supporting both groups and capturing the relay station (objective 1)

Stuck with the northern table edge, I had slimmer pickings, so I decided to abide by the great Orky concept of concentration of force! Seeing as I had basically three manoeuvre units – the Sunz, the Goffs and the Slasher I kept things simple, massing my force on the western side of the table.

With their huge speed, the Evil Sunz would loop round the town and charge the astropath tower (objective 8), while the Slasher and the Goffs would pound up the middle, capturing objectives 1, 6 and 7 in the process and then administering the coup de grace to whatever Imperial forces were  unlucky enough to survive the Sunz onslaught!

Orks won the initiative, surging forward like a green tode. The Evil Sunz gunned their engines and raced forward, a motley collection vehicles enveloping the town in a flanking movement and making for the Astropath tower, while the Goffs uttered an almighty WAAAAGH and hurtled forward waving bolt pistols and knives in a furious onslaught. The Slasher moved forward in a somewhat more considered fashion, positioning itself strategically to cover objectives 6 & 7.

On the southern edge, Land Raiders gunned their engines and rolled forward to secure objective 8. Hulking Terminators leapt from the transports into cover while their Devastator brethren deployed in perfect formation from their Rhino transports to grab objectives 2 and 4. 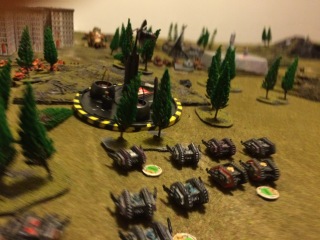 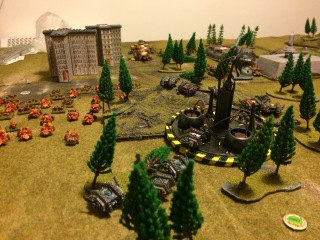 Meanwhile, the Warlord lumbered into position between the two task groups 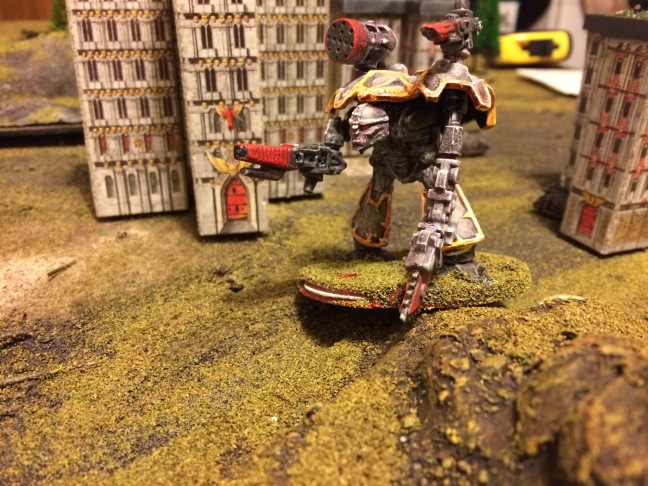 Ineffectual firing from both sides took out a few Evil Sunz battlewagons and the Mekboy Dragster, but nowhere near enough to make a dent. The Imperials hunkered down for the inevitable onslaught next turn..

Marines won the initiative and with pretty much the entire force on First Fire orders, we hunkered down and let the green tide come on..

For the most part, turn 2 concentrated on the Ork rush, Evil Sunz orks engulfing objective 8 causing heavy casualties to the Land Raiders and Terminators. Elsewhere, the Devastators picked off a couple of Goff lead tanks, the Whirlwinds stripped a power field off the Slasher and the Warlord and Slasher engaged in a fairly ineffective exchange of fire.

We issued orders before checking initiative, having possibly gone A Beer Too Far – I banked on getting initiative and managing an orderly withdrawal, inflicting casualties on the Evil Sunz and luring the Goffs onto the guns of the Devastators and Warlord. Objectove 8 would fall, but we would regain it later.

That was the plan.

Then Dan won the initiative.

The Slasher, on First Fire orders, pivoted and fired a ball round into the Devastator detachment holding objective 2:

As their infantry engulfed the defenders on the Astropath tower, the Evil Sunz battlewagons charged the Warlord!

The Orks now held Objectives 1, 6, 7 & 8, as well as breaking the Terminators and the Land Raiders, putting them on 29VPs, but incredibly, the Devastators and the Warlord had caused enough damage to the Goffs to break them and the defenders of objective 8 had sold their lives dearly enough to break the Evil Sunz.. the Marines were on 39! 1 more and it would be an Imperial victory!

Things were going to the wire this turn. A sole surviving Rhino sped off from the ruins of objective 2 to claim the empty objective 5 while the Orks were forced to swing their offensive to the left. The shattered remains of the Goffs moved to close assault the Warlord while the Evil Sunz regrouped and gave fire support and the Slasher loosed another ball round at the Devastators on objective 4.

Amazingly enough, however, my quick thinking Rhino crew had saved the day, taking me up to 44 VPs – despite the enormous casualties he’d inflicted, gutting my force, Dan could only muster up 37. An Imperial victory!

But to the sole surviving Devastator detachment and Whirlwind battery, as they faced the remains of two ork clans and an undamaged Slasher, I’m sure it didn’t feel that way…

A great game all round, kudos to Dan for playing Orks like they were meant to be played and damn near pulling off a win despite our poor maths! After a brief reflection and a deep resonant belch, Dan declared he accepted the result but felt he’d earned a moral victory, and frankly, I have to agree with him. The pride of Hazzard was well and truly mauled, with only three Whirlwinds, four Rhinos and seven infantry stands remaining against four stands of Nobz, five of boyz and a fully functioning Slasher. The Redeemer’s PR department have their work cut on this one!

Tune in again soon for more of our Epic tomfoolery, and here’s wishing you all a very happy Christmas and New Year!