However, I have bent the rules of our “spend no money” austerity pledge a little and bought (gasp) some MORE superglue. Which has enabled me to rebuild the second plasma reactor and actually have the thing stay together:

For the plasma effect I went with a technique I picked up from GW’s own Duncan Rhodes – basically stippling purply-pink clouds and then layering up the lightning patterns. The metallics were a cheap craft “Boltgun Metal” style metallic, drybrushed with Vallejo Silver.

This piece went together a little better than the first, I think – bit more solid, better measured. Looking back though there are lessons to take moving forward as a modeller:

I am TOO DAMN LAZY. For a start I eyeball everything, if I’m going to make quality stuff I need to measure. The rivets (PVA drops added with a cocktail stick) – I could have taken a ruler and drawn them out and placed them in straight lines. But I didn’t, I winged it.

On top of that, I’m messy. Looking at that model I see glue residue everywhere. I’ve painted most of it up as mud, so I think I’ve got away with it, but from now on I’m getting an emery board and sanding down offcuts, glue strands, and just general mess.

Plus, there are some silly slapdash details. Those nodule things on the side of the tank are supposed to be glued to flat surfaces- glueing them to a curved one means there are gaps. I could have filled them, I didn’t bother.

These are weaknesses I’m going to work on this year, as I’m determined to improve my skills. Check out people like Dave Taylor Miniatures, Insaniak, JohnnyHell and The Blackadder on DakkaDakka.com not forgetting our regular heroes, Lukes APS, The Terrain Tutor and Wyloch – these guys can build incredible stuff by thinking ahead and taking the time to do it properly! Attention to detail – that’s the watchword for 2018, and that’s what’s going to take our builds to the next level.. 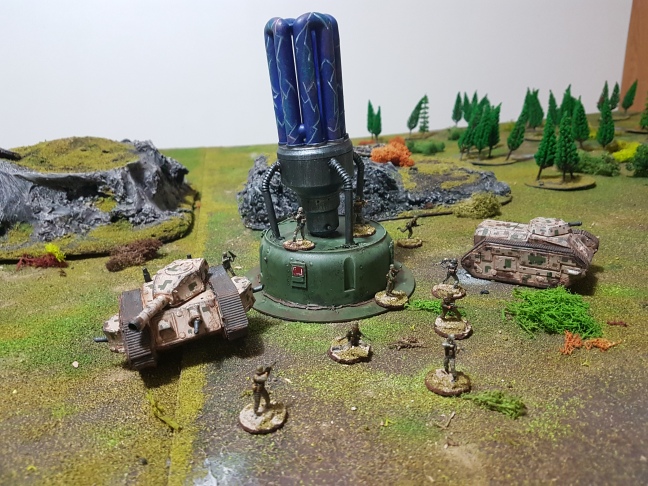 January is Austerity Month here at Skinflint HQ, we’ve blown all our cash on gin, biscuits and Last Jedi tickets – so that means a hobby budget of £0 for the first month of 2018. But does that mean that we have to stop making stuff? Of course not – thriftiness is the mother of invention.

And in that vein, I grabbed the glue gun and ventured into the box of Interestingly Shaped Crap that all we gamers keep hidden away in the depths of a cupboard..

I knew when that bulb went that it was Too Interestingly Shaped to throw away (and as luck would have it, I had another one.. stay tuned) – it put me in mind of the Imperial Plasma Reactors from Dawn Of War, screaming to be turned into something sci-fi-esque… and pawing through my box I discovered the Q-tip box lid which could serve as a base/fuel tank/ reactor core, which set the basic shape in my mind. I used a mix of hot glue, tacky glue and polystyrene cement to attach these together (with mixed results, as you’ll see later on..), and then cut some drinking straws to size to function as power conduits/ coolant pipes. A good tip here – drinking straws have very little surface area for contact and glueing, so filling them with something solid is a good idea. I glued a bit of kebab skewer inside each one, meaning I had a decent contact area with the bulb and the lid. I then added a few bits of cardboard detailing to be a control panel of some kind, and trimmed a sheet of granny grating to create access ladders.

I wanted something that could serve as both an Imperial piece for 40k or Epic and a suitable clunky retro-sci fi piece that could conceivably be a part of a 1950’s superscience project, so I picked Vallejo Olive Drab for the base and body, a generic Boltgun Metal equivalent over  a black undercoat for the base of the bulb and the tubular part got painted blue in preparation for a cool forcefield trick I saw on a Warhammer TV post.

Unfortunately, I encountered a few problems during this phase – for a start, thinnning down my black paint meant that it refused to adhere to the primer.. and then, the water in the acrylic paints began to reactivate the tacky glue (which is just regular PVA with isopropyl alcohol added for faster drying) – meaning the model literally came apart on me!

So after much swearing, and a few consultations on Facebook, I (sorry Dan) slightly reneged on the “no money” pledge of January and bought some superglue and No More Nails, which seems to have done the trick.

After the initial colouring, I washed the olive drab with Army Painter Green Tone, pin washed the detail parts (rivets, ladders etc) with a homebrew wash of green and black paint thinned with water and detergent, then drybrushed up with Vallejo Olive Drab, lightened with cheap tan craft paint for highlighting. I added a few streaks and pin washed Vallejo Smokey Ink, and sponge chipped with grey, black and metallic for a weathered appearance.

Following Duncan Rhodes (hallowed be his name)’s advice, I created the forcefield effect by stippling on purple and light blue patches, before outlining the lightning patterns faintly in grey and going over them with white. 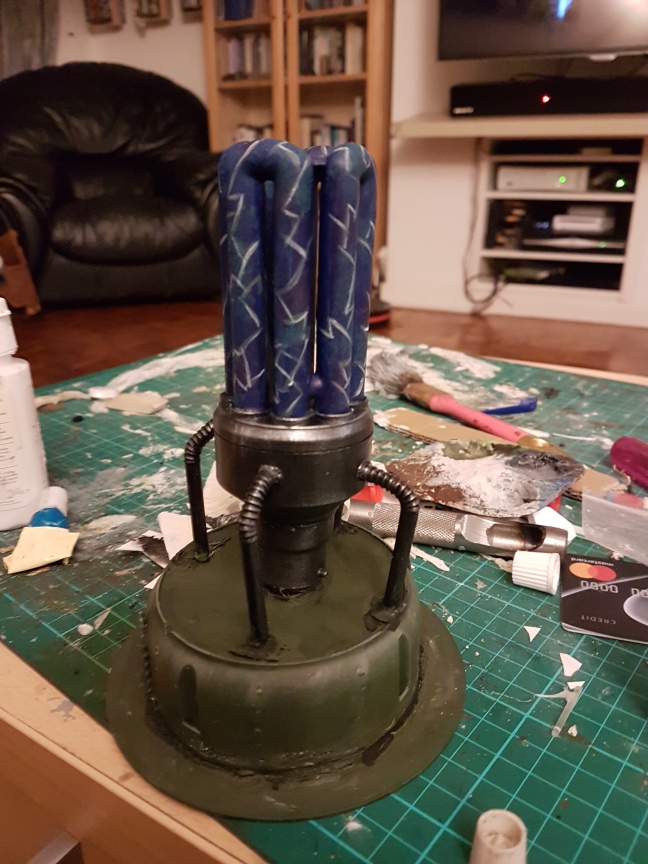 I camouflaged the No More Nails residue around the base by painting it up as mud, highlighting up from dark brown to light brown – and here it is in situ:

A fair few flaws in the detail, but not too shabby from two feet away.

Guarded by Squad Beauregard from the Hazzard 1977th:

And there you go, a cheap and (relatively) simple scratchbuild! And now I know a little more about glues and paint… the next model should go alot more smoothly.

Hmm, famous last words. Never mind – till next time, stay thrifty and happy gaming to you all!

January is a bleak month. Christmas decorations are down, work is back and you can’t start the morning drinking Buck’s Fizz without someone frowning at you.

Particularly the passengers that get on my bus.

Anyhoo, time to think about the year just gone and the year ahead.

2017 was not a great year in terms of gaming, in that we didn’t really play that many games – but the ones we did were pretty freaking great, including the biggest ever Apocalypse Earth battle and an Epic rematch. What this year was, though, was the year our blog grew up. Seriously:

And it would seem that y’all out there have a lot of love for the dastardly Holy Soviet Empire – these three posts got over 1000 views each!

While 2017 may not have been too great in terms of games and battle reports, it was pretty great for us both in terms of painting and modelling, starting with the discovery of Wyloch, then Mel The Terrain Tutor and Lukes Affordable Paint Service. Honourable mention to Duncan Rhodes from Warhammer TV for teaching us the wisdom of two thin coats rather than one thick one!

So this led to a revamped board, a complete revamp of all our scenery, a repaint job on both Apocalypse: Earth factions, a cheapskate take on the 40k Imperial Guard,  Ork and Space Marine factions – we’ve been busy!

Incidentally, our blast markers seem to have caused quite a stir – I would put a tutorial together, but the entire idea was something I copped from Mel, check out his original video here.

So for 2018, what’s the plan? Well, life has a way of fething up your plans as soon as you make them, so we’re not going to get too carried away… but, some resolutions all the same:

We’re going to explore the other Apocalypse: Earth factions – it’s all been about the Atlantic Alliance and the Holy Soviet Empire so far, but there’s also the League Of European Nations and the Asian Communist Federation to check out.

Escalation is surely due in Epic scale as well, I keep seeing Dan looking at yogurt pots and  pictures of scratchbuilt Gargants…

We’ll also be revisiting Hyperian Wars and there’s a couple of other projects in the offing: Future Force Warrior takes Apocalypse: Earth 200 years into the future as humanity takes it first steps into the stars, and Apocalypse: Earth – Black Ops explores more detailed small scale encounters in the secret wars against the Greys, bringing an RPG element to the fractured world of the Apocalypse War. The rules will cover small scale skirmishes and role playing campaigns where your fireteam members will be able to develop, gaining new skills and equipment as they face ever darker and more sinister threats…

So, that’s what’s in the pipeline for the year ahead. However, it’s January – and that means we’re both skint. So a pact has been made – no spending money on hobby stuff for a month, we’re going to improvise and use what we’ve got… necessity being the mother of invention and all that… So let us leave you with a shot of what’s on the modelling table right now – two ancient battered Matchbox cars getting the Orky makover, because Da Skooderia are coming to town in 2018!

Stay tuned, stay thrifty,  and let’s see what we can put together without cracking open the credit card….