So it’s been half term this week in Ye Olde England, and that’s a chance to put the feet up, raid the junk bin and MAKE STUFF.

After a mere three year gestation period, Da Skooderia Ferrorki are finally starting to approach the tabletop – DIY battlewagon and warbuggies in the last instalment, and before we tackle the fiddly infantry conversions (using Caesar 1/72 fantasy orcs as our base models) it’s time to bring some firepower to the table in the form of an Orky Dreadnought! 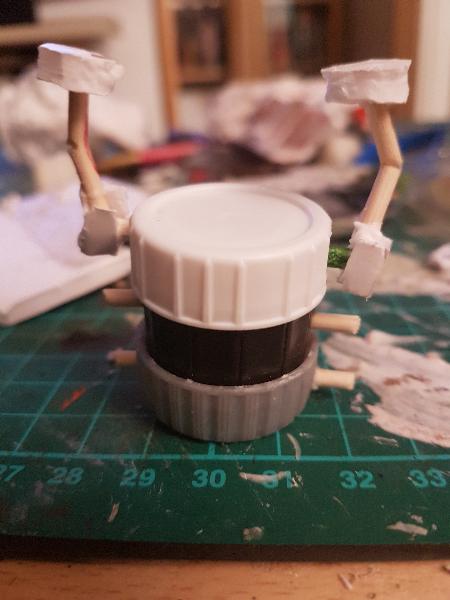 We begin with three bottle caps glued together to create the body. Next stop was puncturing these caps to allow insert point for the arms and legs (kebab skewers) – this was done with a screw driver and a pocket knife, although in retrospect a pin vise would be a better bet. (Health & Safety warning – if you’re doing this, be careful I managed to slash my index finger open. Not recommended, I like my index finger unslashed. )

For the hip joints, I used little pieces of scrap foamboard – as you’ll see later, this created a few problems.. if I was doing it again, I’d use greenstuff – and buried the legs and hips in it, cementing with tacky PVA based glue. You don’t want superglue or anything solvent based for foamboard, as it melts the foam. Feet were octagons cut from foamboard, and the knee joints were done by cracking the legs and soaking the cracked joint in superglue. 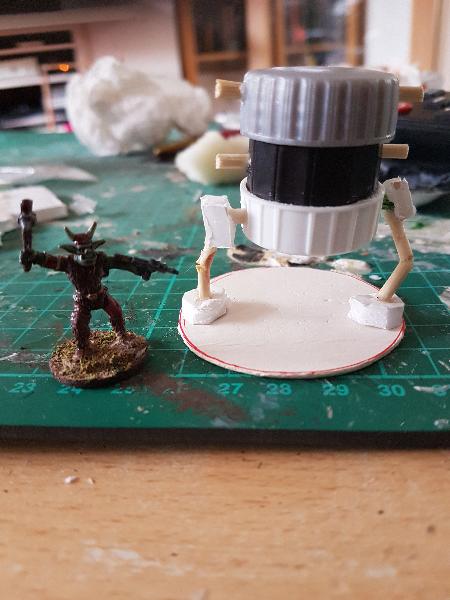 Shown here with Warboss Enzo Ferrorki for scale – base is cardstock, drew around the bottom of a wine glass and cut out

Next up, weapons! This Dread is packing a heavy bolter and a heavy flamer, along with a couple of Power Klaws – I figured it made most sense to mount the ranged weapons on the shoulders and leave the lower arms free for close combat. Obviously you shouldn’t apply too much sense and logic though – it is an Ork vehicle, after all. 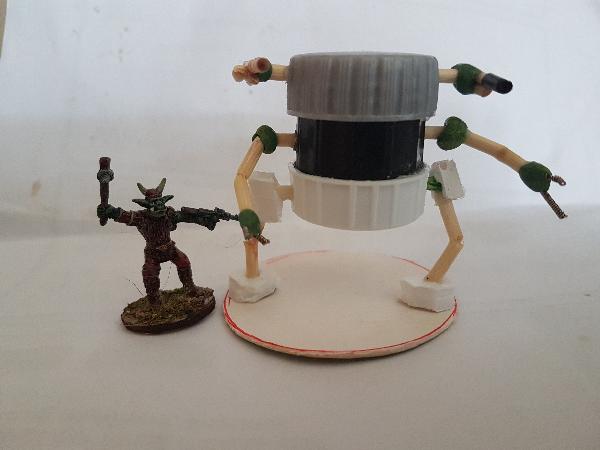 Arms are cocktail sticks using the snap & superglue technique, then little offcuts of guitar string (low E, if you’re interested) bent into a V shape and embedded in greenstuff for the wrists. I used greenstuff to attach and reinforce the joints onto the shoulders.

I chopped up cocktail sticks and a little bit of drinking straw to created the weapons, superglueing the parts together before attaching them to the shoulders using greenstuff – by this point I was feeling pretty good about the project! 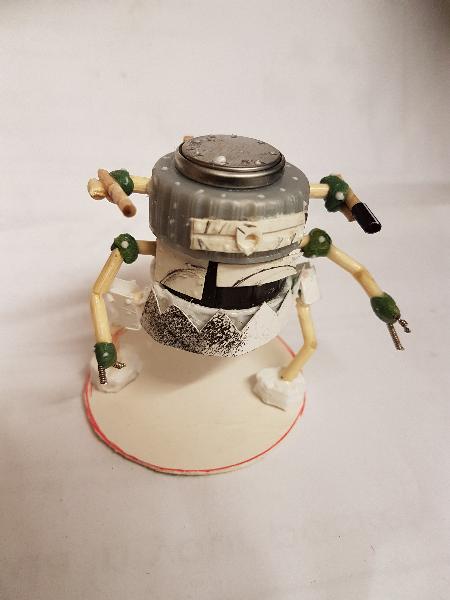 Detailing and rivets – SO MANY RIVETS – added

With the basic elements done, time for detailng! I used Google Images to get some inspiration here using a defunct watch batter for the top hatch scrap card for the teef and other bitz, card and foamboard for the engine block at the back, straw and cocktail sticks for the exhaust stacks, and because this is 40k and these are Orks – RIVETS!!! MANY MANY RIVETS!!!!

Actually, this is where being super cheapy 1/72 scale pays off, as instead of arsing around with holepunching and glueing fiddly bits of card until you’re driven to the bottle in frustration, I just use the tip of a cocktail stick to dab on little dollops of PVA. This dries nicely into a dome (ish) shape which pin washing and drybrushing picks up nicely.

Next up was priming – I used cheap white car spray paint as I wanted the red nice and vivid, and in any case I didn’t have any black – and this was where things went a bit awry. Although I covered the exposed areas of foam with PVA and paint, I clearly didn’t do it thoroughly enough as something in the spray paint reacted with the foam, causing a slight change in the gait – in short, it looks pissed as a rat.

Paint scheme is exactly the same as I used on the buggies and battlewagon, so I won’t go into that here. 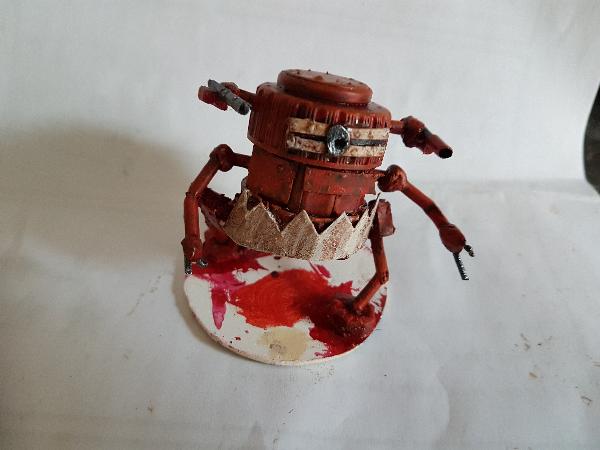 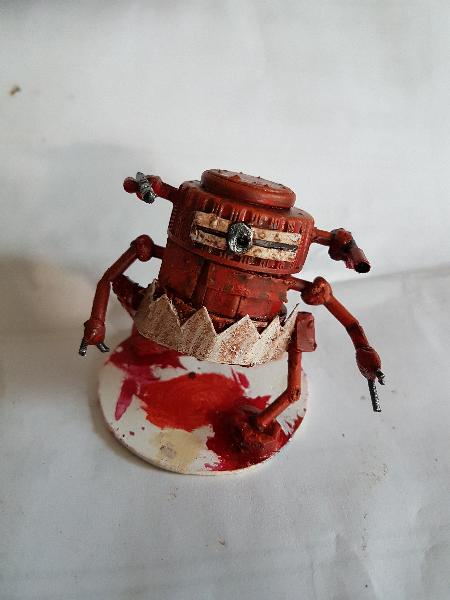 I went heavy with the weathering again, based with a mix of Garage Floor Dust (patent pending) and flock, finishing with a coat of matt varnish, and good to go! 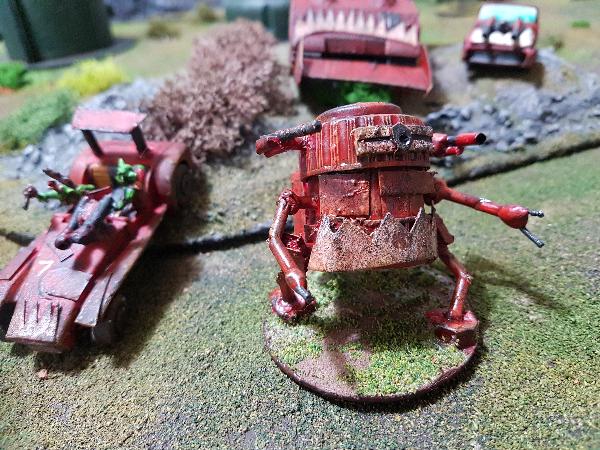 It’s a shame about the wonky gait, but the more I look at it, the more I quite like it – I imagine this guy lurching across the battlefield, piloted by a Grot drunk on both power and fungus wine! He’s certainly a big fella, probably close to his 28mm counterpart, and should provide both a visual centrepiece and some hefty punch when Da Skooderia FINALLY hit the tabletop…

Overall a fun build, and actually not too tricky. I’d like to give a shout out to Wyloch of Wyloch’s Crafting Videos whose superb series on DIY miniatures inspired this build – thanks man, we’re waiting to see what you come up with next!

Stay thrifty out there, we’ll be back next time with some teeny weeny greeny meanies as the Boyz get their turn in the spotlight.

Finally, January is behind us and we’ve made it through our month of austerity with a couple of sweet little builds under our belts it’s time to get back to a pet project that’s been languishing under the heading of “wouldn’t it be cool to do X” for quite an embarrassingly long amount of time…

Da Skooderia Ferrorki! I’ll skip the back story (link here and here), suffice it to say this is an Evil Sunz warband who picked up some Warp echoes of ancient Terran racing and liked what they saw – especially the red cars!

And thus was the concept for the Skooderia born. Back in 2015.

Yes, I know – I’m going with the excuse that I was waiting for my painting and modelling skills to mature sufficiently..

Anyway, with the help of Caesar’s line of Fantasy Orcs and the redoubtable Sgt.’s Mess line of Cold War Small arms, we’ve knocked together a decent amount of AK-47 and FN-FAL wielding infantry, but this post is about the vehicles – two warbuggies and a battlewagon.

The battlewagon began life as an ancient Airfix self-propelled gun picked up off eBay so long ago I can’t even remember when, decorated with cardboard squares for the extra bush armour, cardboard and cocktail sticks for the front wing and corrugated card for the tail wing (I suppose technically I should update it since I built it in 2016 and the F1 regulations have changed since then, but y’know…)

The two warbuggies started life as VERY ancient die cast Matchbox hot rods – I fished them out of a box at a car boot sale a couple of years ago there was something about them that just screamed “Orky”.

This one started life as a Morgan roadster – I added lashings of cardboard for armour, built the multimelta and mount from kebab skewers, with a bit of greenstuff rolled and dotted with hole from a cocktail stick to make the melta barrels. Kimi and Felipe are Caesar fantasy orks, cut down to fit in the cocktail and superglued – and because I’m an idiot, I glued them in place first… won’t be doing that again!

Red 5 started life as a dragster, and the exposed V8 and Mad Max styling meant that this HAD to be a Ork vehicle! He’s mounting twin autocannons (cocktail sticks topped with drinking straw muzzle brakes) and a couple of cardboard fins.

I should mention the rivets at this point – all seven gajillion of the bastards. These were little blobs of PVA dabbed on with the point of a cocktail stick and left to dry – actually not too time-consuming and they look quite good, scaling nicely and easy to pick out with wash & drybrush techniques.

Speaking of which – painting. I undercoated with cheap white spray paint then a cheap craft red (bearing in mind the wisdom of Duncan Rhodes two thin cats being better than one thick one), and then washed with Vallejo Skin Wash, taking away the crimson edge and making it a bit more orange.

Next up wash a pin wash with Vallejo Brown Ink, wet blended with Smokey Ink for the darker bits. Dab this on all the rivets too, don’t worry, the next stage will add the highlights.

For said next stage, I took the original red, mixed it with orange and drybrushed over the whole thing. I did two or three layers, each time lightening with yellow (NOT white, you’ll end up with pink – and we’re doing Ferrari, not Force India!) up to almost pure yellow with a very light drybrush.

I did the canopy on Red 5 wet blending turquoise up with pure white, and the metallics started from a black base, dryrbushed first with gunmetal and then very light silver highlight.

Kimi and Felipe were a bit of a problem – I went with a light green thin coat for the skin, washed with Army Painter Green Tone. Two washes got me a nice rich green, and then a very careful drybrush of light green mixed with yellow brought the highlights out. With models this small, I like to use washes where possible as it’s way easier to wash down a light colour than highlight up a dark one.

Bone colours were tan, brown ink wash, drybrushed with cream and then white for the final hoghlights.

THEN weathering – sponge chipping black and metal on the exposed surfaces before drybrushing the mud on, three stages of brown.

Phew! Thanks for bearing with me through this wall of text – hope it’s helpful to some out there. Now to close with some pretty pictures:

So the goal is concept to tabletop in under three years – will we make it? Next up, building a Killa Kan out of cocktail sticks, cardboard and plastic bottletops.. tune in next time to see how we get on!