So, hands up who remembers this?

As it happens, we don’t either – don’t drink and eBay, kids! So, we were wondering what we should do with this haul – loads of Grots, a full complement of 20 Marines, and a couple of Orks in various states of repair… not to mention the cardboard cutout Dreadnaught, plus the very brightly coloured Codex Imperialis and campaign book.

Now, this raises an interesting, almost paradoxical conundrum – because we can’t afford proper 40k minis, we’d got sunk deep into 20mm (aka 1/72 or 1/76 or HO) gaming, meaning all our terrain was designed and sized for this. So getting our hands on actual 40k minis kind of threw the plans out a bit. As discussed before, we planned on using them as proxies for OOP systems like Firefight, Space Crusade etc (not to mention freely downloadable ones like Deadzone), but with all this… stuff… it was more or less a given that at some point we’d end up giving 40k a try again, and we’ve had a couple of little skirmishes with our new skirmish board.

And yeah, compared to modern systems, this old girl is a bit clunky. But we got to thinking – both me and Dan got into 40k in 1991 (albeit independently of each other and hundreds of miles apart) and by then the 1st edition Rogue Trader had evolved massively from it’s origins as an almost unplayable (in practical terms) RPG/ skirmish game and was heading towards the slick and shiny and GLORIOUSLY colourful subsequent editions. Dan and I both remember getting the 40k box set – and be aware, a 40k box set was a brand new thing back then, never been done before! – for Christmas 1993, and working our way through the mini campaign missions given in the book. If you’re unfamiliar, this set focused heavily on the 2nd War For Armageddon, and featured a three (four?) mission campaign of Blood Angels vs Orks.

Hmm. We should mark this occasion.

We did something similar last year, commemorating 30 years of 40k by playing The Battle At The Farm from Rogue Trader using 8th Edition rules, and had a blast, but we figured, you know what? 2nd Ed was our edition. Goblin Green bases, primary colours – the grim darkness of the far future had never looked so appealing. Army lists existed from the drop, rather than being gradually added over six years of White Dwarf articles.

You have to figure by this point, the game had evolved quite away from it’s origins, and was badly in need of a rewrite! And so it was…

You bought wargear with cards rather than having a 15 % chance of having it. The thing had been tested, and many mechanics from 2nd Ed actually form the backbone of 40k as we know it now, love it or loathe it. We may not have had Tau or Necrons, but we had Squats, dammit! (at least for a while..) And so begins our new project for the remains of 2018 – painting up the contents of our unwitting haul to replicate those halcyon days gone by – we began with the Marines, and Dan has a load of Grots ready for the camera – then there’s the scenery to make… lots of ruins (which we’ll make 3″ by 3″ to also be Deadzone compatible – muy Skinflint).. plus we have found a very cool papercraft of an Ork Deff Dread… And then come Christmas, we’ll run the whole campaign!

So, here’s raising a glass to our “origin story” within the hobby – we may not be the seasoned grognards in at the birth of it all with Rogue Trader, but we were there for 40k to find it’s feet and become what it is today. And for all it’s (many many ) faults-  it will always have a place in our hearts.

So the dust has settled after last month’s mega-battle, and after gorging on our biggest game yet, we’ve decided to turn our attention to something a little lower key and skirmish-y.

Now, there’s a strong appeal to these types of games – low model count means easy buy in, short set up and pack down means it’s easy to get in a quick game even on when time and space are a premium, and it’s a great way to learn a ruleset without jumping in the deep end with a full combined arms force!

Clearly GW agree with us, having just released the new version of Kill Team, but we’re planning on starting with a few more free-to-download sets, not to mention our own Black Ops system (intended to be a more detailed small scale RPG/ skirmish variant on the basic Apocalypse: Earth game engine). An accidental alcohol-related eBay purchase means we’ve got ourselves a crowd of 2nd ed 40k Grots and Marines, so we figured time to make them somewhere to have a scrap!

We did actually put together a folding urban warfare table last year, built from the back of a set of shelves – roughly 3’x3′ folding, made of some sort of hardboard/ cardboard laminate – but we’ve learned a lot since then, and now it looks a bit… crap, to be honest. So we decided – time to pimp, yo. After getting the stonework and texture paste on, I made sure to seal thoroughly with a spray of diluted PVA (empty Windolene bottle, ten parts water to 1 part PVA). In fact, I actually hit this three times at roughly 4- 6 hour intervals over the day – worth it in terms of time investment to make sure the thing doesn’t end up shedding grit and cat litter all over the floor every time you get it out!

With priming complete, the next step was painting. I used a recipe that has served me well, nicked wholeheartedly from Lukes APS. I used house paint tester pots for economy and ruggedness – hilariously, Duncan recommends using about £20 worth of Citadel model paints for this…. don’t, just don’t! – and put simply:

Drybrush red (lightly, and only in selected places) 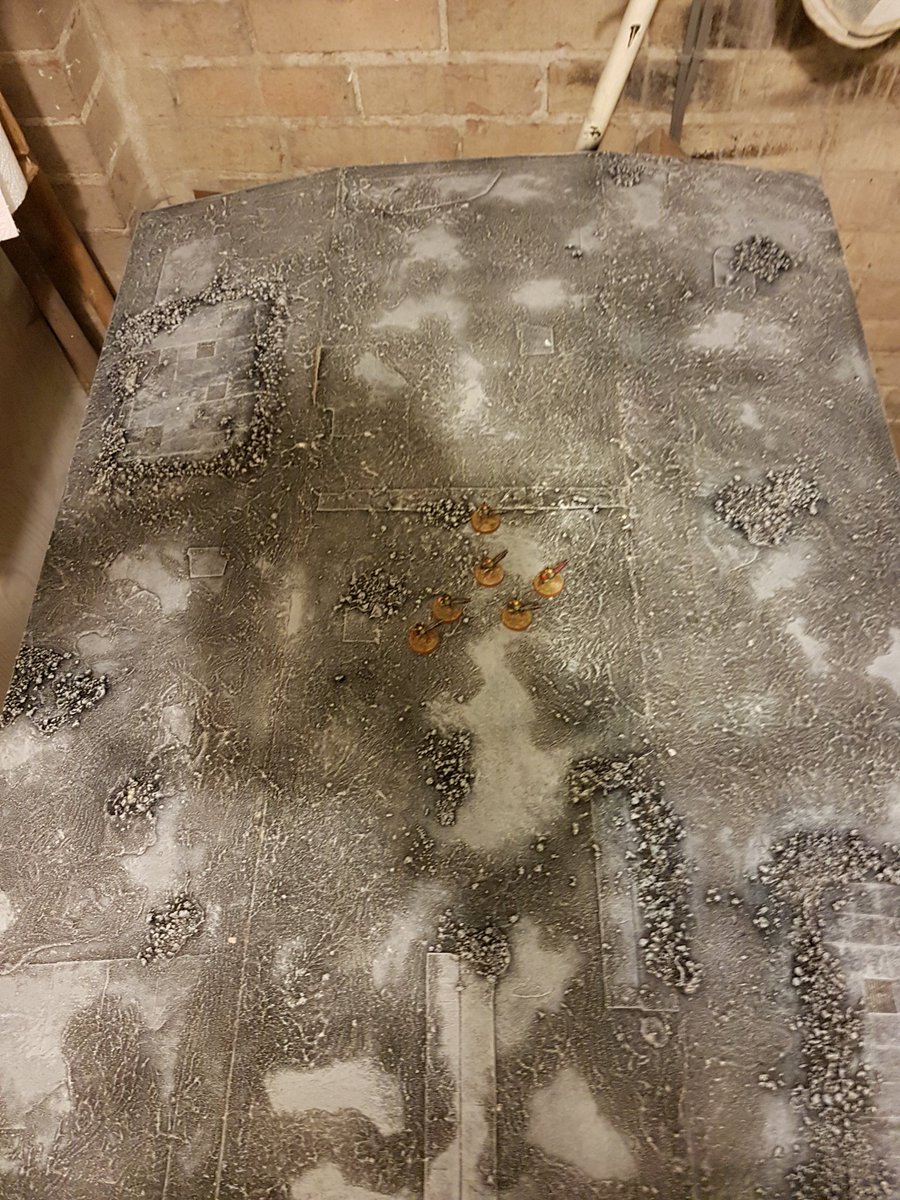 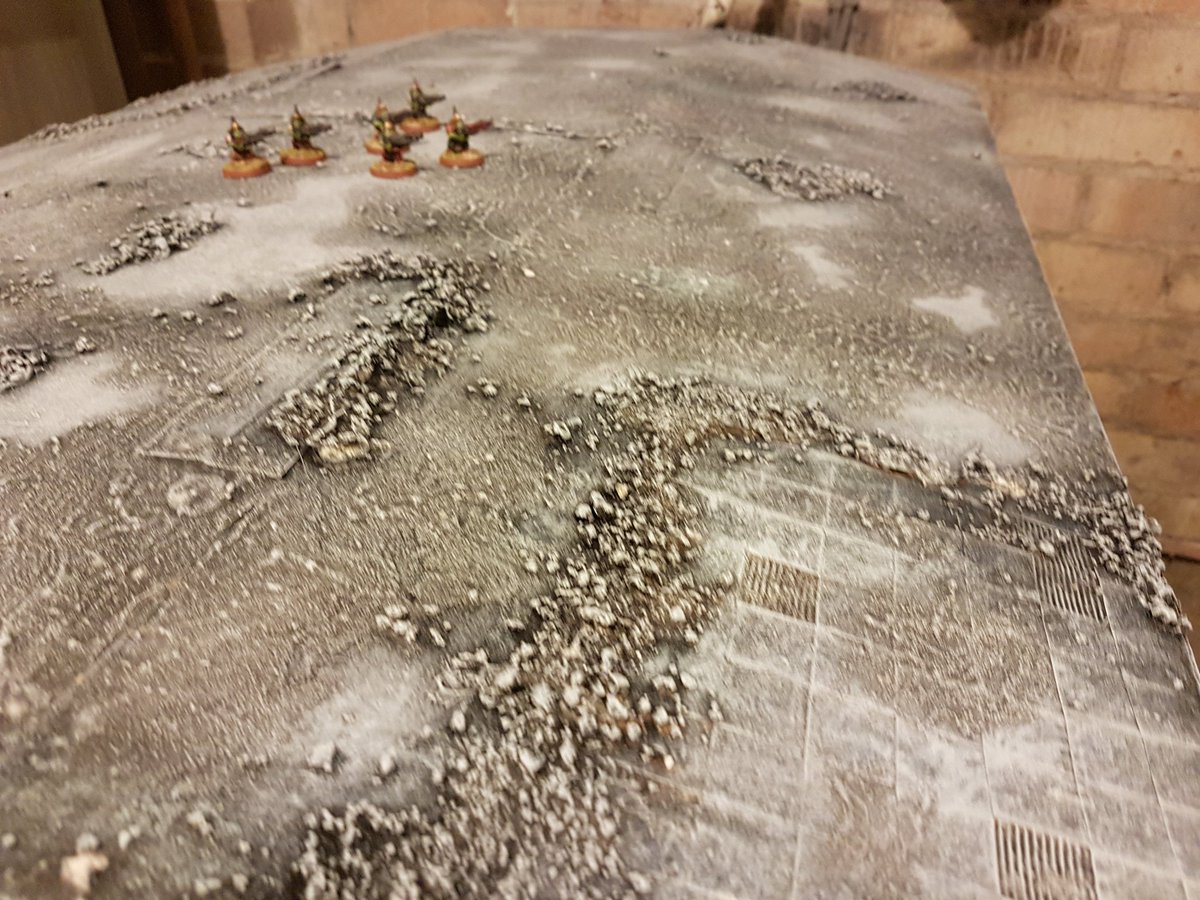 Next up, I made up some very thin washes based on brown, green, black and skin/ flesh wash colours heavily watered down and daubed about the board. This gives it a rather cinematic feel which I found I liked. 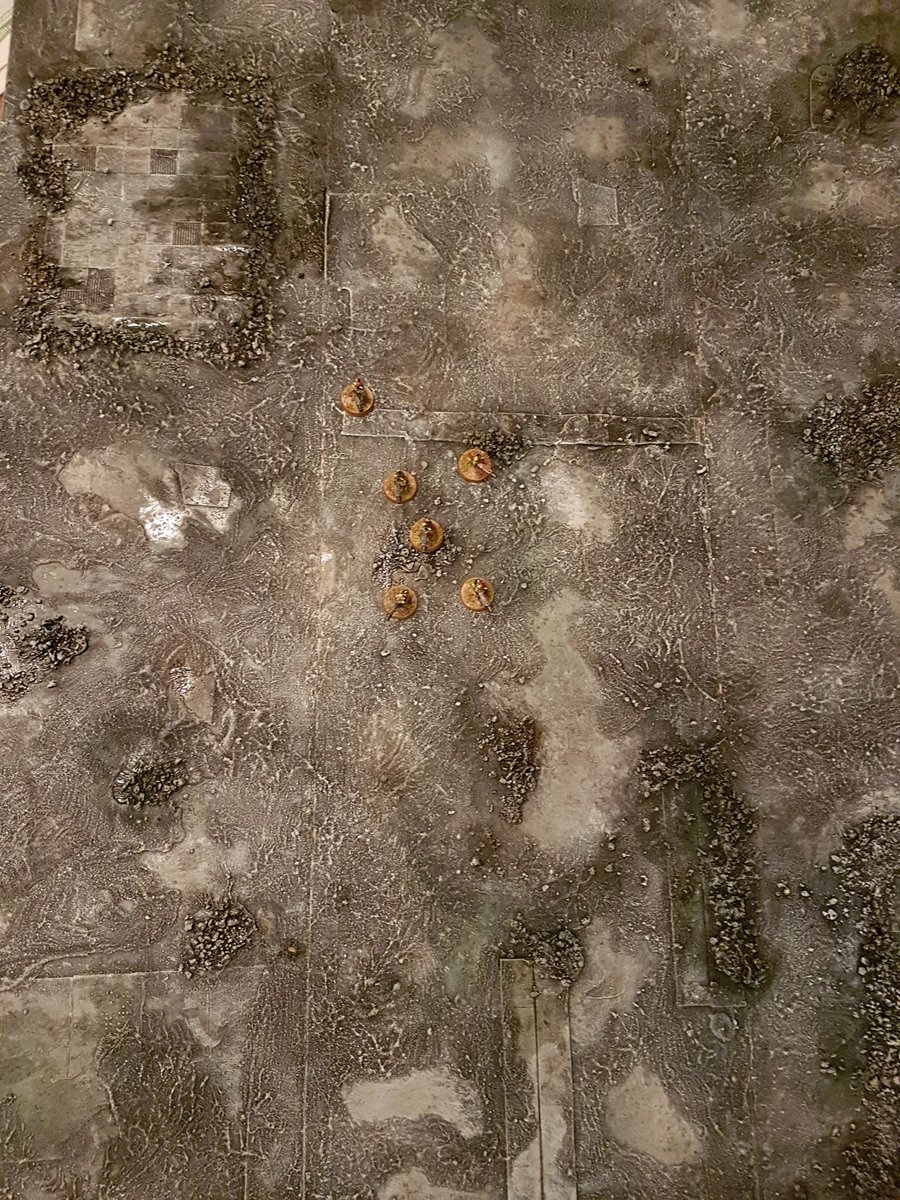 For the muds, I went with a burnt umber basecoat and gradually drybrushed up a couple of lighter browns, taking care to really work the brush into the texture to blend with the concrete.

Overall, this was a fun little build and I think t actually came out looking pretty good. It’ll suit Black Ops, and 28mm stuff like Kill Team and Necromunda. Plus, it folds away!

Next step is to scale up these techniques for the main 6’x4′ board, and a squared off 2’x2′ for Deadzone – thanks to Mantic for making the core rule book freely available as a download – and actually, none of these steps are particularly difficult, just require a bit of patience, planning and imagination. Youtube, and particularly The Terrain Tutor and Lukes APS are your friends here – good luck, stay thrifty and we’ll see you soon!