Focus? What is this focus of which you speak? Heresy!!

What is that called?

Anyway, that’s what’s happened with us – a Luke’s APS video brought it up, and then over the next couple of months we just kept hearing about it, reading about in blogs and forums.. what is it? Deadzone, that’s what!

I’ve long had a weakness for small, quick skirmish games that bridge the gap between wargame and boardgame, and doing a little digging into what Deadzone is.. we liked what we saw.

Particularly when we discovered the rules available for FREE on Mantic’s website. BOOM (as the saying goes).

So, we had the rules downloaded. Next up – miniatures. Well, that was easy. Dice – Deadzone runs on a D8 system with specially labelled D6s for command rolls, but normal D6s will work just as well- you simply assign a number to each command skill. Ebay, £3, 20 D8s show up a week or so later. God bless those hard working Chinese kids.

Finally, terrain – Deadzone box set ships with a 2′ x 2′ mat with printed 3″ squares, and a terrain system based around 3″ cubes. Happily, Dan had a couple of bits of hardboard knocking around his shed, roughly 2′ x 3′ – the excess would be used for dice, counters, roster cards etc.

Sprayed the whole thing with cheap black spraypaint and then began drybrushing up as per the previous urban board.

After all this, the board was pretty warped, about a 1cm bulge in the middle. Were all our efforts to be in vain, our attempts at Deadzone gaming to be thwarted by models gradually sliding off theboard?

Happily, no – Wyloch to the rescue – we coated the other side with thinned down PVA and left it for 24 hours. Result? Totally flat board.

Added some scenery built a while back from various bits of food packaging and away we go!

The rules give a sample scenario along with two strike teams – we’ve proxied the Marines as Enforcers and the Gretchin as Forge Fathers, and so far we’re 3-2 to the little stunties.

Deadzone is definitely a fun game, once you get your head round the dice test mechanic, and it’s great for keeping both players involved through alternating activation boosted by command dice providing extra actions throughout the game. It’s definitely a game that lends itself to tactical play – you’re going to get the victory points through taking and holding objectives, as it can be damn difficult actually putting a model down, (particularly as the wimpy laser rifles the Enforcers are equipped with don’t pierce armour too well), but this is no bad thing – in the real world, you wouldn’t just chuck your highly trained strike team into a meat grinder, and as we get the hang of this game it’ll be fun to try and build a narrative campaign.

Time to finish up with some pics, as Grot and Marine get down and dirty in the Deadzone: 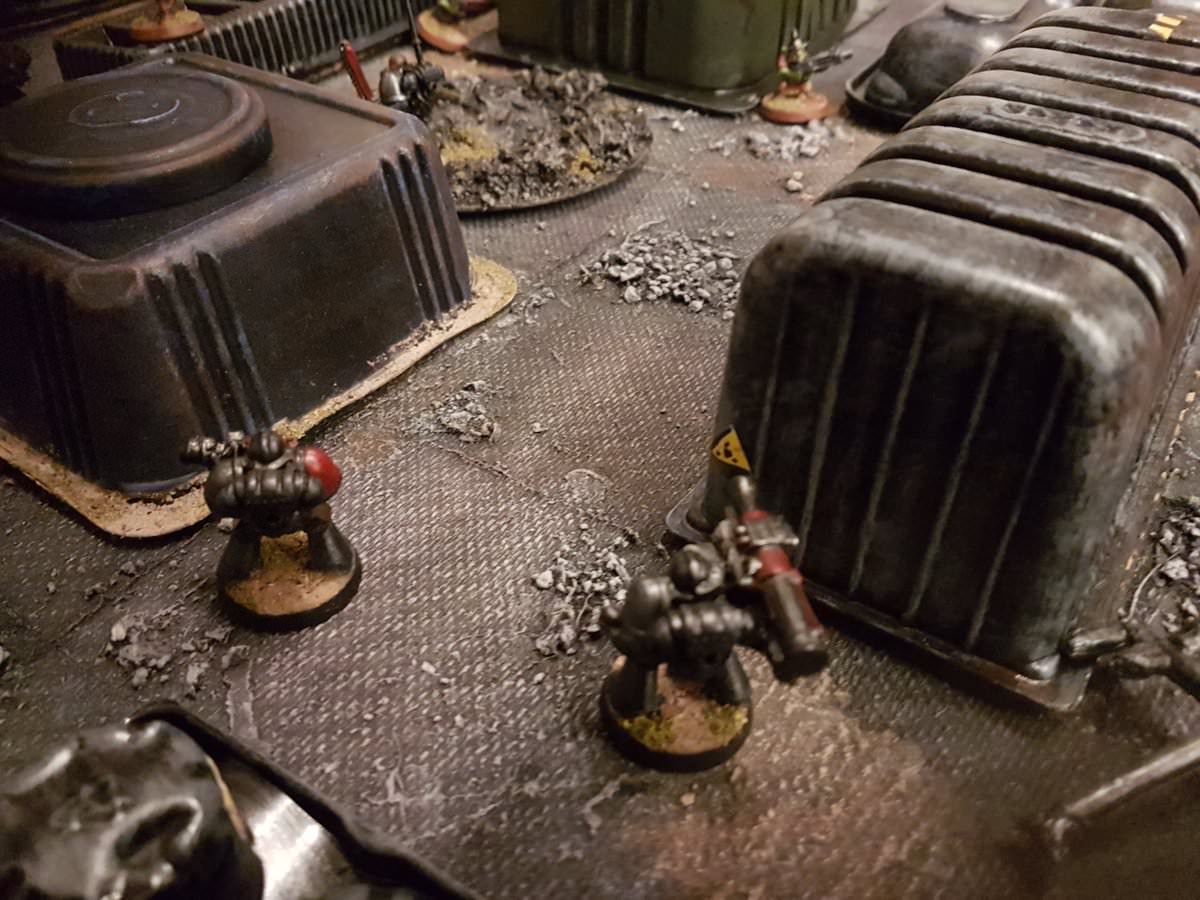 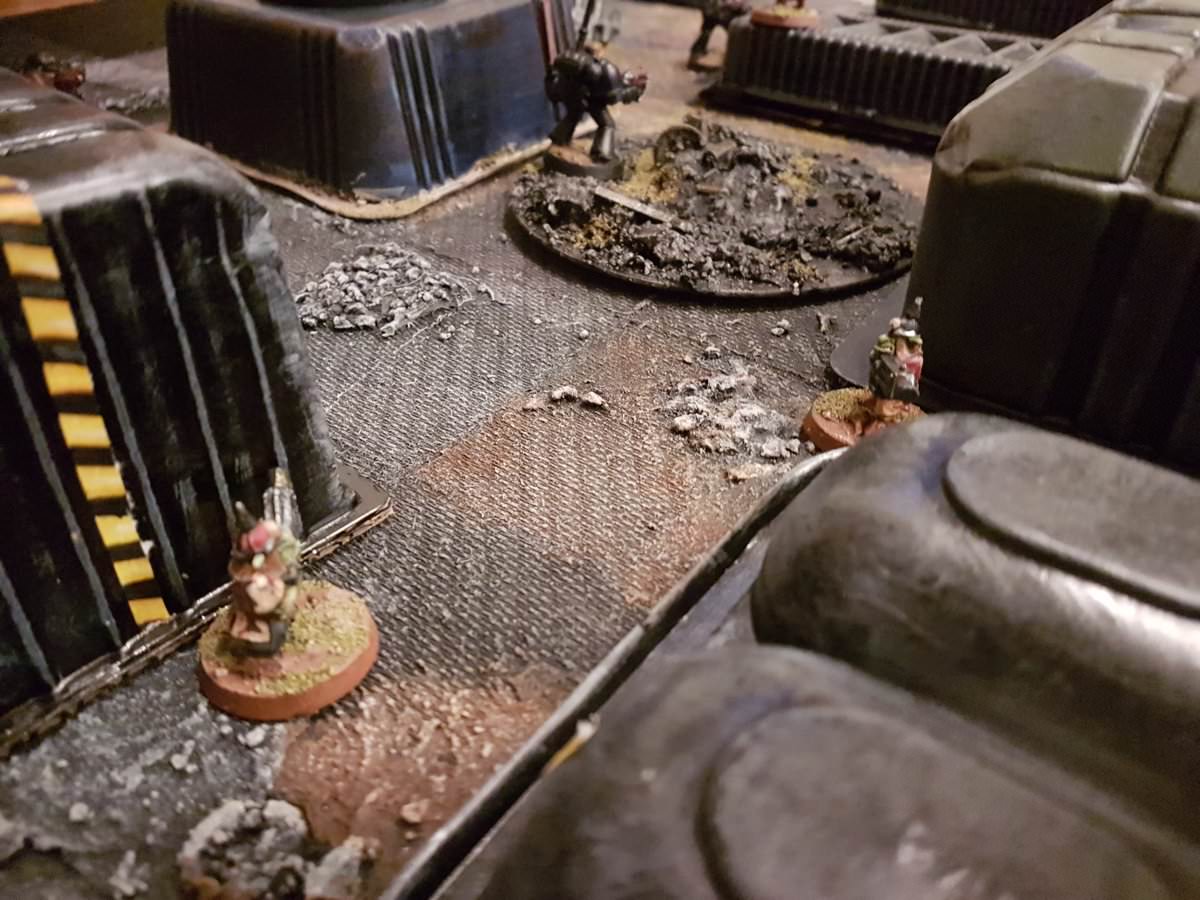 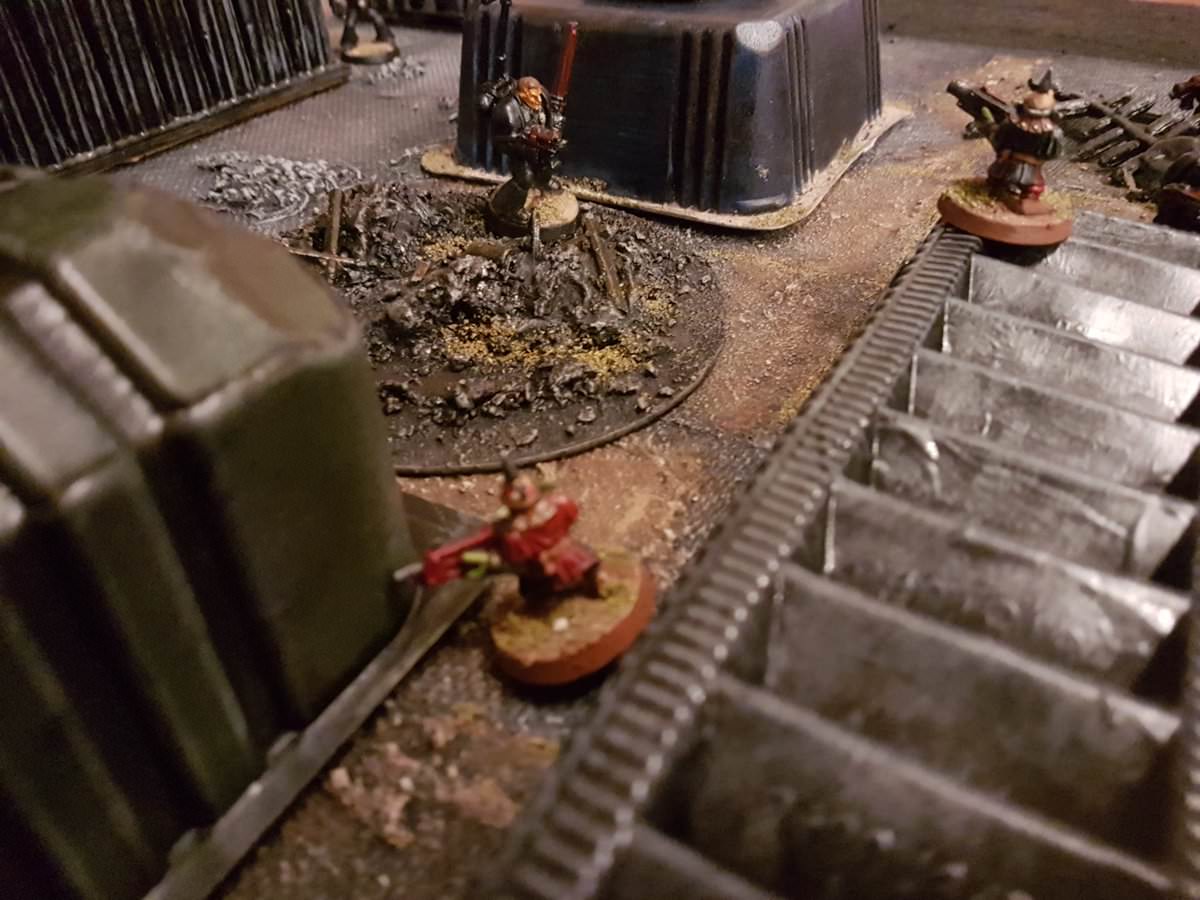 Till next time, stay thrifty out there and we’ll see you soon!

The plot thickens! Just as Dan’s Marines have got themselves fly new Deathwatch paintjobs, I’ve not been idle with my share of our Ebay booty – first out of the blocks, the Grots! Now, as it turns out there are 36 of these little buggers and to do the mini campaign properly I’m going to need 40, so I may be taking to eBay again pretty soon.. oh, the irony! This is how wargamers end up with houses full of tiny plastic figures… but enough of that for now.

I spread some home made texture paste (filler powder, sand, PVA and water) on the base and hit the whole thing with cheap pound shop white primer, before giving all the figures a prewash with thinned Vallejo brown ink.

I’ve got two mobs of ten painted up so far, with a pretty straightforward three colour scheme – dark grey, bone and red. To differentiate, Furst Mob has grey and red blocked out with a camo scheme (of grey and red) over the bone areas, while Secund Mob has the bone and grey blocked in and a bone and grey camo  scheme layered over the red. Thurd Mob, when I get round to them, will have bone and red camo layered over the grey and blocked in red and bone. and Uvver Mob will either have a whole load of camo or none!

I used Vallejo German Grey, a cheap acrylic red and a craft paint bone. Black ink wash, thinned, over the grey and thinned brown ink over the red and bone.

For skin tones I went with a thinned light green, washed with Army Painter Green Tone and then highlighted up with green mixed with yellow, and a touch of bone for the teeth and a dash of red for the eyes. After that, I added a unifying light drybrush of bone, and then on to the metallics – block in black and then boltgun metal highlighted with silver, and then washed with brown ink to give a rusty metal vibe.

Then, basing! I used the same brown craft paint I used for the leather part, then drybrushed with bone, before drizzling flock and Garage Floor TM dust, and then a final edge of brown to touch the whole thing up.. and then, varnish and done!