Many years ago, a budding teenage me was snooping about the dusty corners of that wonderful den of geekery, “Another World”, when I should chance to happen upon a book. Something about it caught my eye, and a quick flick through hooked me in completely. I stumped up my £10 (or whatever it was) and off I went with a book that would bring me many, many happy hours of nerd bliss.

This was the book:

Now, I’d seen a few AA “Levy” series minis in blister packs and bought a few to use as 40k Imperial Guard renegades/ Chaos cultists/ Genestealer cultists/ PDF, because they caught a pretty cool aesthetic with the visored helmets, flak armour and Space-Kalashnikov rifles, and the Crusader series had appealed to me as Space Marine proxies,so curiosity got the better of me and I thought what the hell.

I remember being significantly underwhelmed flicking through my new purchase on the bus ride home – the full colour cover giving way to a black-and-pamphlet with pencil artwork, fluff that was… well, meh, really, they’d gone for the same Dark Ages In Space feel as 40k, but with a lot less grim dark and a lot less imagination (in fairness, though – GW are the fluffmeisters, you aren’t going to win going head to head with them there). On the human side you’ve got the Levy – basically Imperial Guardsmen, with the elite rising through the ranks to become Crusaders, power armoured elite troopers whose own elites include Templars and Hospitallers. On the alien side, you have the Shia Khan…

These are sort of an Ork/ Eldar hybrid race, faster but weaker than humans with their basic troops known as Goblins (wielding weapons codenamed “Popcorn” and “Eggtimer” by the human forces.. a shout out to the NATO names for Warsaw Pact weapons during the Cold War, perhaps?)

The game included some thin cardboard terrain tiles and tokens, a long way from GW quality cardstock, a few typos in the rules suggesting poor editing… I didn’t expect much.

Boy, was I ever wrong. Firefight is a brilliantly designed game, based around the concept of action dice allowing you to do particular things (I’m willing to bet more than a few of the Mantic design team played this game back in the 90s) – close fought, addictive, fast and deadly. I don’t mind admitting a strong influence on our Black Ops skirmish game (still WIP for now). Every trooper has rolls a certain number of dice depending on what action he has chosen, modified by what he’s armed with, with a basic rule of 6 generating an offensive action (such as shooting someone in the face), and 1 generating a defensive action (dodging out of the way). The designers commented that they hoped to produce a system that was easy to play but hard to read, and you know what, they managed it.

The rulebook teaches you the rules stage by stage, starting with a basic house clearance mission where a Levy squad with a Crusader NCO clears a house of Shia Khan Goblins and Infiltrators, and the subsequent missions bring in heavy weapons, melee, more sophisticated actions such as medical aid, and mini campaigns on both strategic and tactical levels, where your Crusader or Levy platoon patrol across a city working their way through snipers, ambushes and (as the name suggests) firefights!

It’s been a real blast getting back into this game again, and I’m planning to replace the thin card tiles with proper MDF based jobs with 3D terrain to enhance the feel – yet another project! But for the meantime, when we want a quick skirmish with minimal set up, low model count etc, this is our go to game for the moment, and I think will be for some time.

I thoroughly recommend this game for anyone looking for a quick fix wargame, and I commend the Alternative Armies team for producing a classic that holds it’s own 27 years later! You can still find copies on eBay if you hunt around, this game is worth the effort to find.

Till next time, stay thrifty out there!

I’ve been wanting to do this for AGES.

I’ve long had a vision of my miniature armies fighting their way through a ruined urban battlespace, diving and weaving their way through dense cover, shattered buildings, ruined walls.. the whole bit. Stalingrad, Berlin, Hue, Fallujah.. right up to the shattered metropolises of the 41st millenium and everything in between.

Now, we redid our regular board last summer, but I couldn’t help looking at the flip side of our chipboard shelves and imagining texturing and painting it up to model the ruined city I’d always seen in my head. But I was always worried I might not be able to match up to what I saw in my head. After mentioning it to Dan over a beer for the millionth time though, he told me to “either shit or get out of the kitchen” – which I took to mean either shut up or get on with it!

We’d built a small urban board and a Deadzone board over the last couple of months and had pretty much nailed down the building/ texturing/ painting scheme – so we had a plan. The main challenge was to ensure that it was “scale independent” – whether we were doing our favoured 20mm, making forays into 28mm, or creating apocalyptic havoc in 6mm, we wanted to be able to use the same board. So it wouldn’t – couldn’t – have too many details, but at the same time we didn’t want to just paint it grey and leave it at that. So….

And with that, battle was joined: 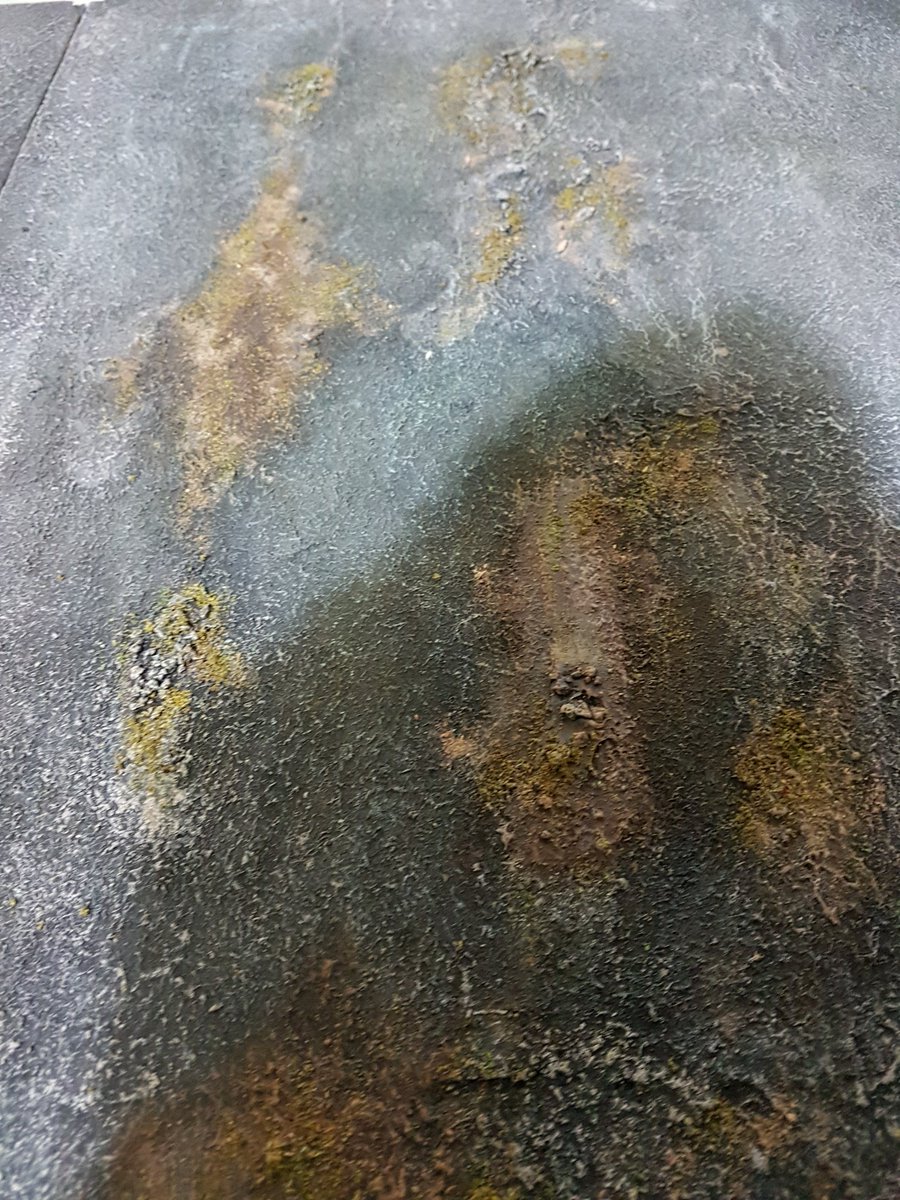 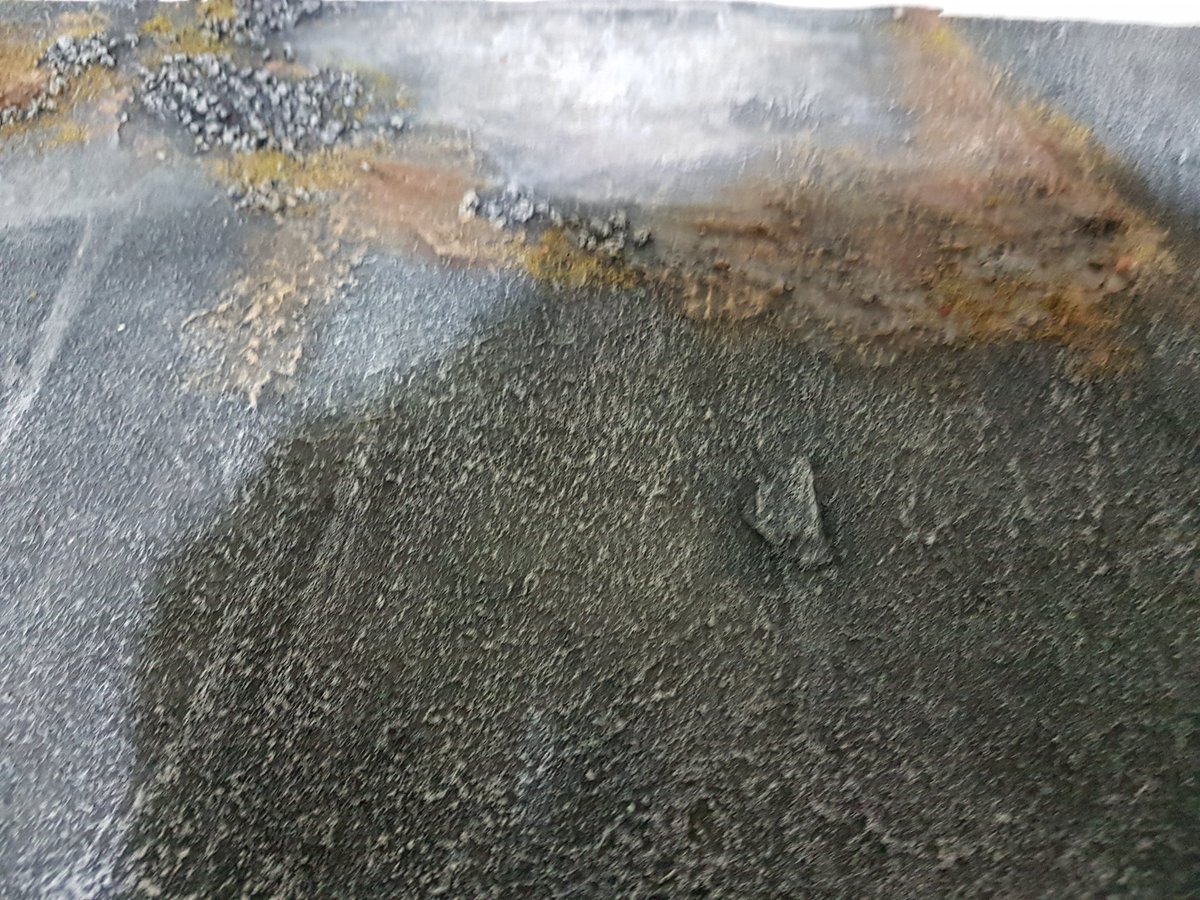 Between the multiple drybrushes, washes, flocks, dust and everything on there blending nicely, I’m really pleased with this, it looks almost exactly like what I’d visualised. The next trick is going to be building the ruins to go with it, I’m really looking forward to having a truly 3D absolutely epic battlefield for Dan to paste me on!

Step 1 – texture paste, acrylic caulk (aka flexible filler) and kitty litter, cardboard paving slabs – basically, all your texture goes down at this stage.

Step 7 – Mud. Stipple on the burnt umber and drybrush up with lighter browns

Step 8 – Flocking – paint on watered down PVA and daub on strategically. Then drizzle – very sparingly – flock and dust.

We also added a couple of girders and a tiled floor, done in the same way as our previous smaller board. So now, the planned 40k 2nd ed mini campaign set on Armageddon will have somewhere authentic to fight over, not green fields on a planet famed as a harsh, overdeveloped Hive World! Can’t wait 🙂