The dust of broken glass ground underfoot, and the smoke of a million corpse-fires fouled the air. Boss Bludguzzla WarBastard IV took to his feet and breathed deeply of the Armageddon stench. Beautiful.

He belched, cocked a leg and let go an insouciant, musical fart. “I luvz da smell of roastin’ humiez in da morning”.

Turning to the motley assortment of Orks gathered in the shell crater before him, he waved a hand toward the biggest ruin on the horizon.

“Dat’s where they are, ladz! Sneaky gitz holed up in dat temple wiv a missile launcher. We’s got to splat dem so we can bring da Dread around and get da boyz ready to kick some proper humie arse. Cumlicka!”

One of the larger Orks cocked an ear.

“You takes your ladz up da front. Keep shootin’, keep their heads down. Ratbollock!”

“You ladz folla mine, we’s going to get round da side of ’em, chuck da stikkbomz, and go feth ’em up, up close and personal like”

WarBastard jammed a magazine into his bolt pistol.

Welcome to Mission 2 from the 2nd Edition Scenario Booklet – High Ground! After a close fought first round (no spoilers here), and some frenzied painting on my part after a a couple of lucky eBay wins fleshed out my Ork forces to full strength, Dan and I warmed up the shed and got busy deploying Ork and Marine alike for the next round.

Turn 1 kicked off with the Marines gaining the initiative – no point in breaking cover yet, and no one in range, so they elected to hunker down and blast a frag missile into the densely packed boyz mobs facing them..

While Boss Cumlicka and his boyz died to an Ork taking the Marines on in place, Bludguzzla and Ratbollock led their boyz in a kunnin’ flanking manouvre, hurling frag stikkbomz onto the hated humiez

And there we are, and Ork victory, but what a game! Right from the off the Marines were on the back foot, their most potent weapon blowing itself up – but what says 40k more than the last stand of Marine Sergeant Taddeus, surrounded by Ork corpses? Brilliant fun, despite 40ks inherent limitations, very cinematic – the game really wrote it’s own story, and isn’t that exactly why we play these things?

Next up, a truly epic battle as 20 marines face a dreadnought, 20 Orks and 40 Gretchin as our campaign reaches its conclusion! Stay tuned, stay thrifty, we’ll see you soon 😉

Bloody hell, it’s still January. All the fun of winter without Christmas to look forward to.. still, could be worse. I could be PM.

Anyway, having spent the run up to Christmas listening to Dan whinge about having to edge highlight a whole 20 Space Marines, I feel inclined to redress the balance a bit – 30 Grots, you idle bastard! For one game!!

And for our next one, I have to get 15 Boyz ready!

Our accidental eBay haul was somewhat lacking in Boyz – there were two, with three arms between them – so I’ve had to dig about on eBay to stock up and managed to pick up a couple of good deals.. unfortunately one is still en route from Poland, ten days late so far… Hmmm. Watch this space.

Anyway, using what I’d learned from the Grots, I set to business:

For the skin tones, I washed the DIY Bilious Green mix with Army Painter Green Tone, then drybrushed the original colour and then pure yellow over the top. Red and brown and camo areas washed with thinned Vallejo Smokey Ink.

Final touches included an all over bone drybrush – very light – with bone, followed by basing. Painted brown, drybrushed with two layers of highlights, and then flock added before varnishing – and here are the results! 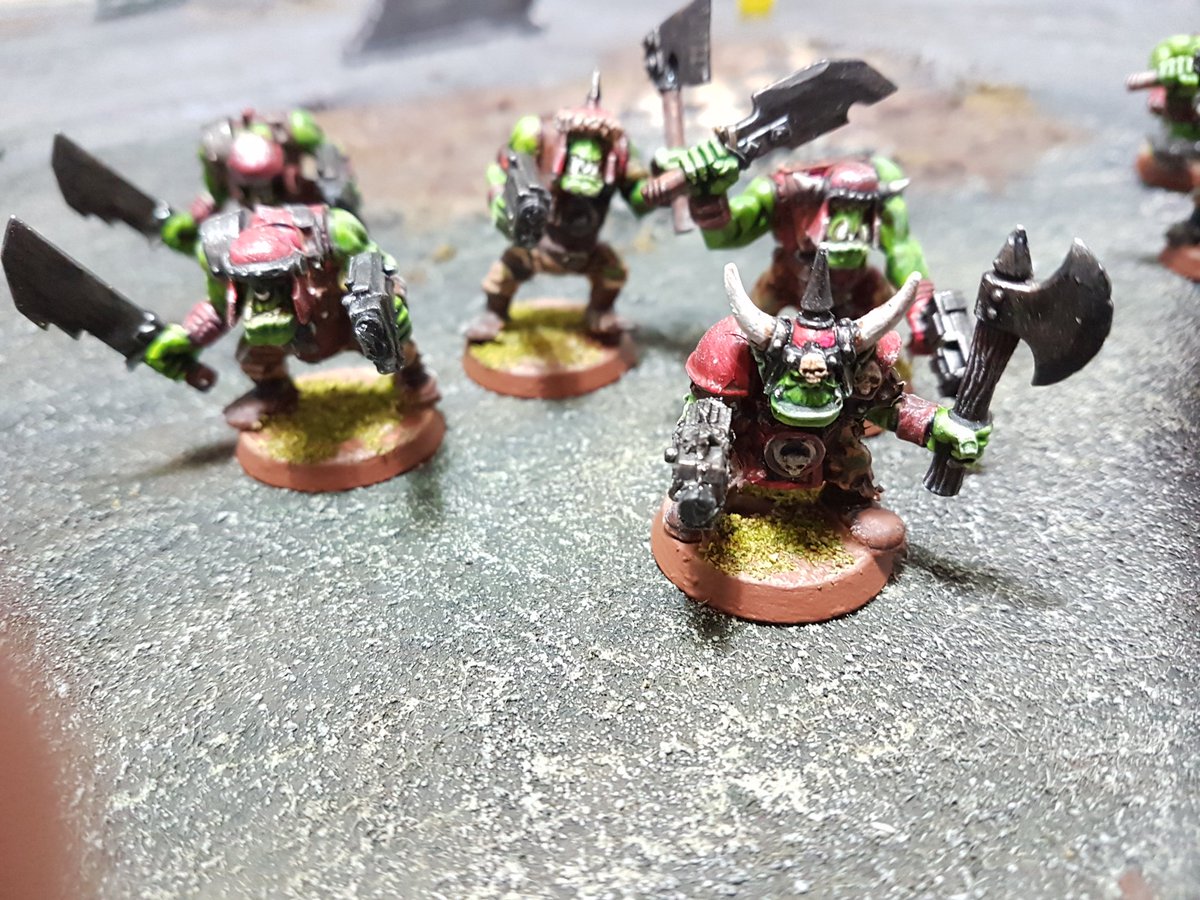 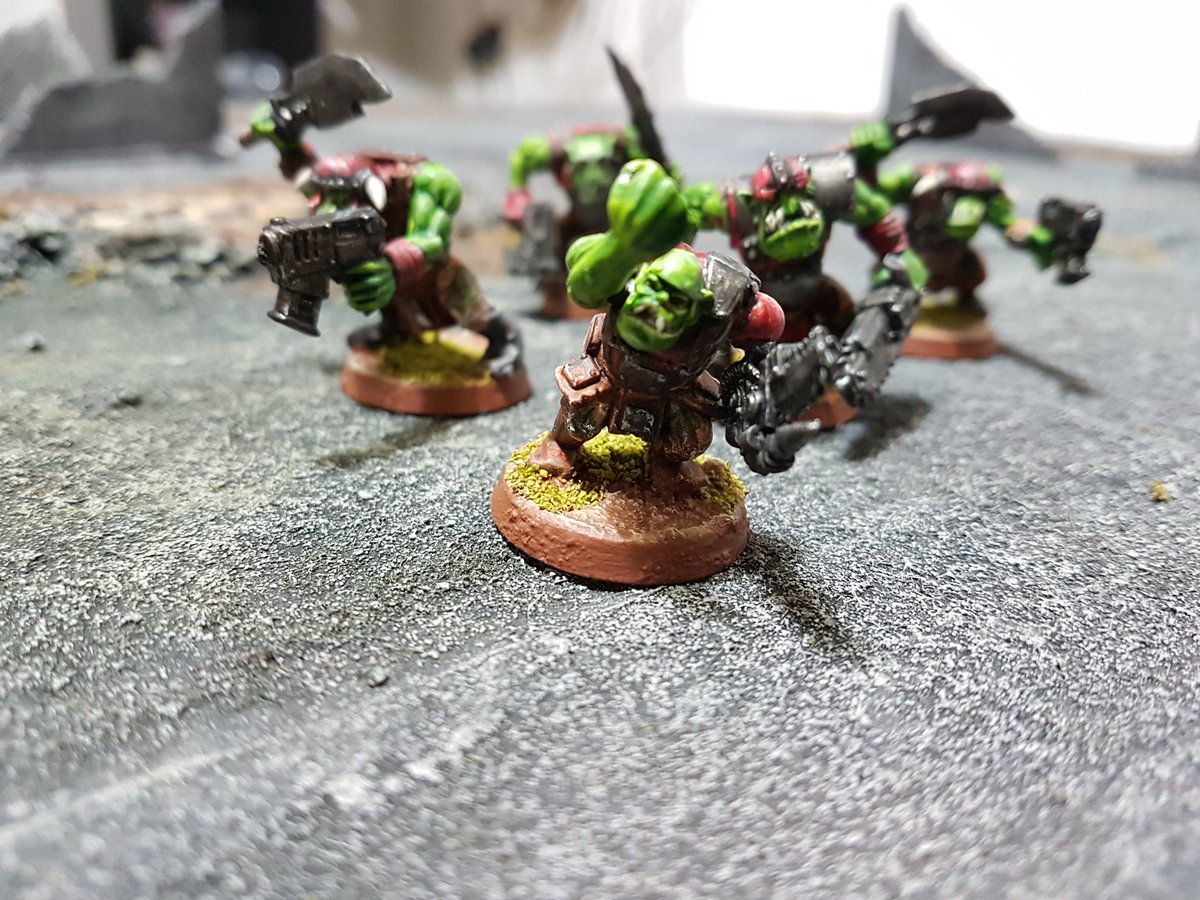 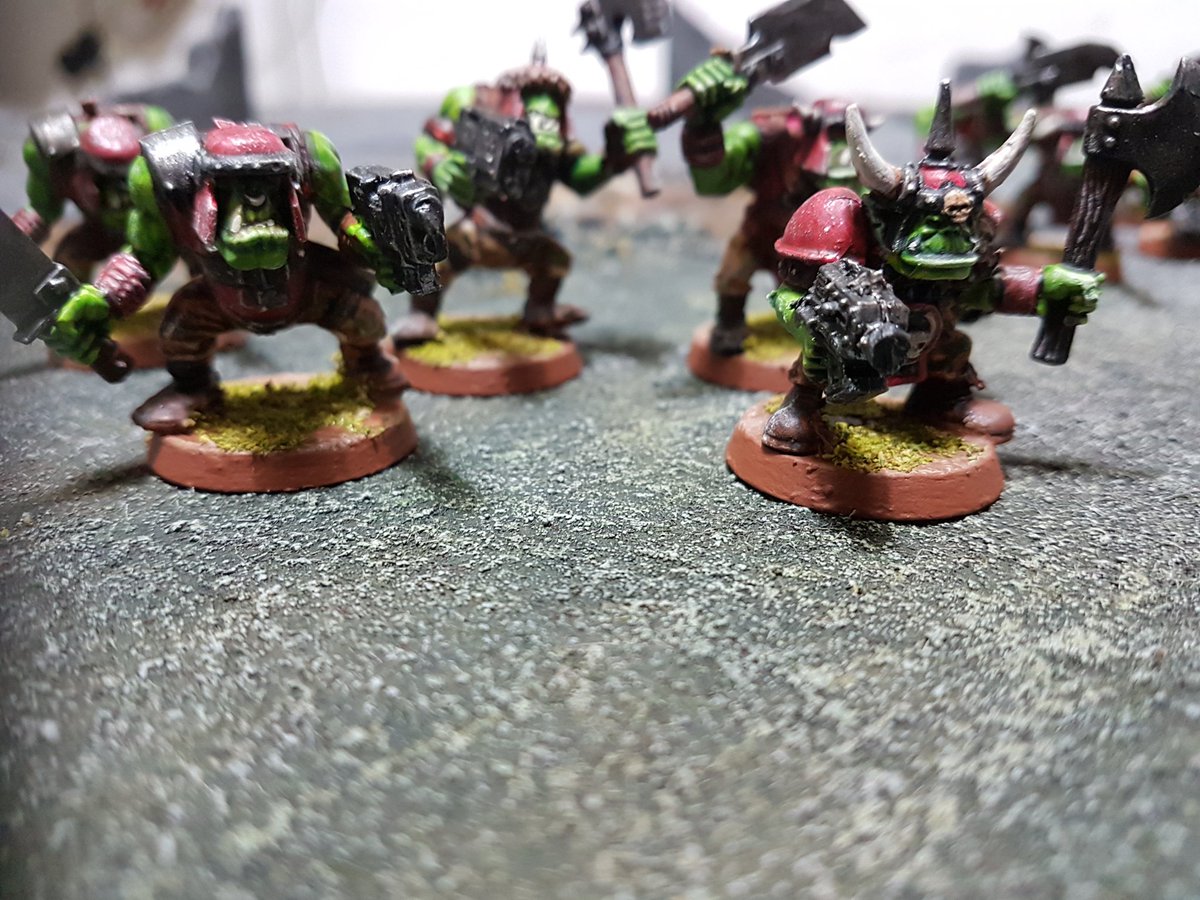 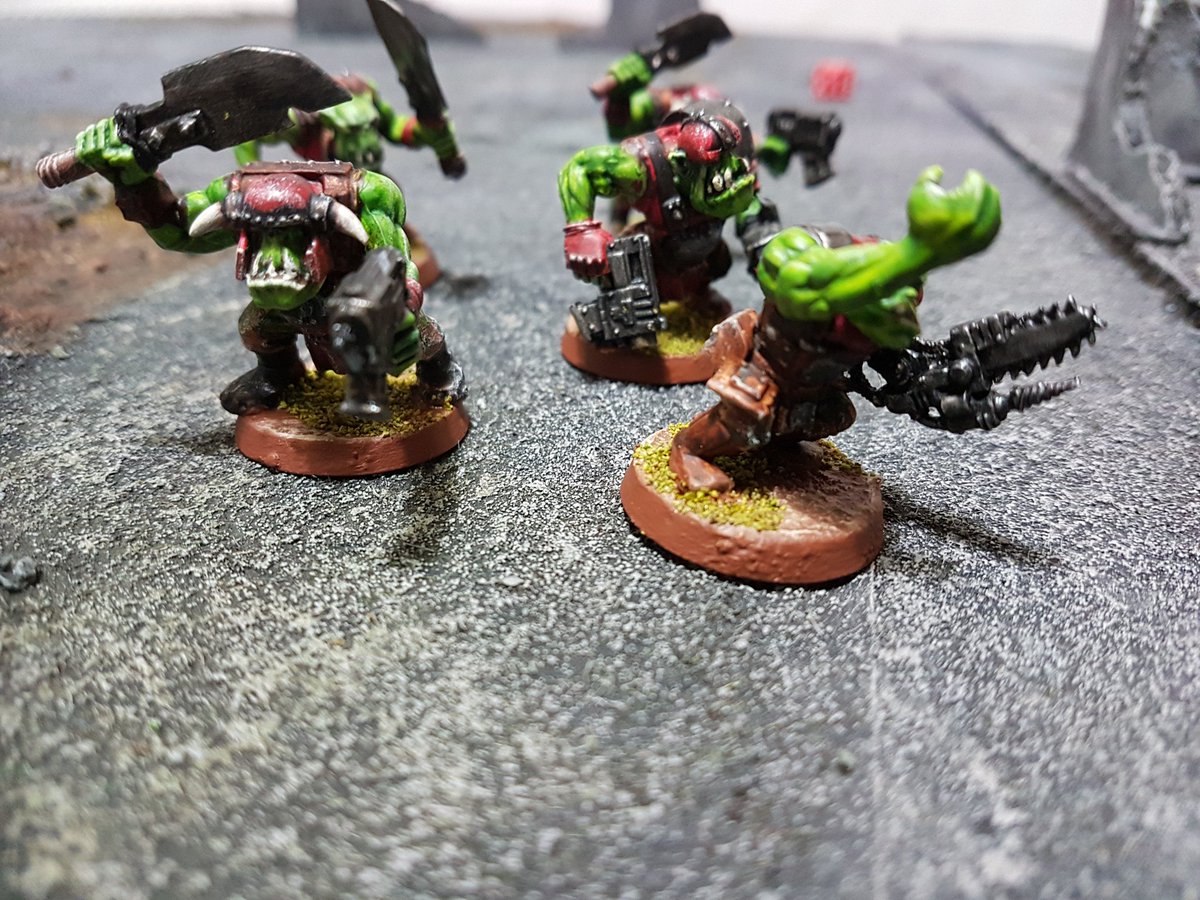 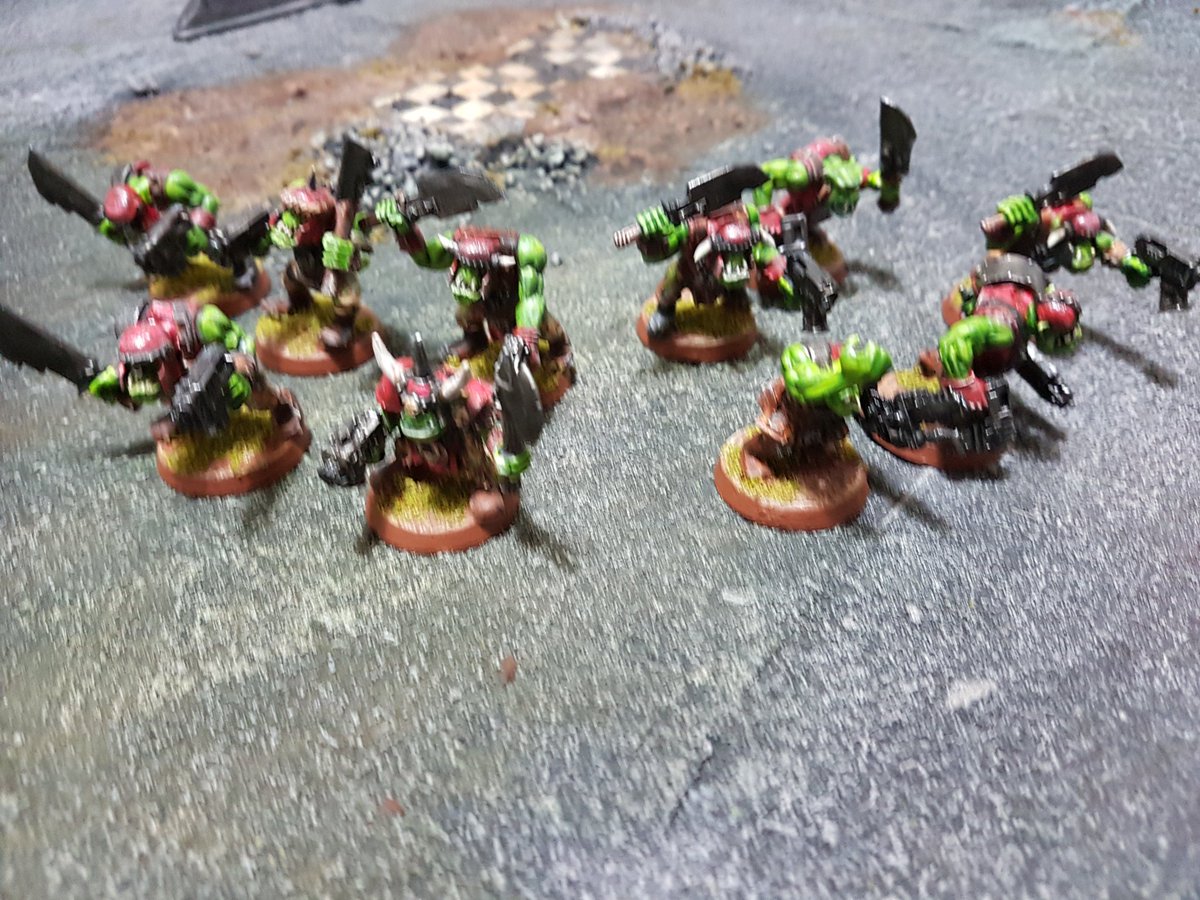 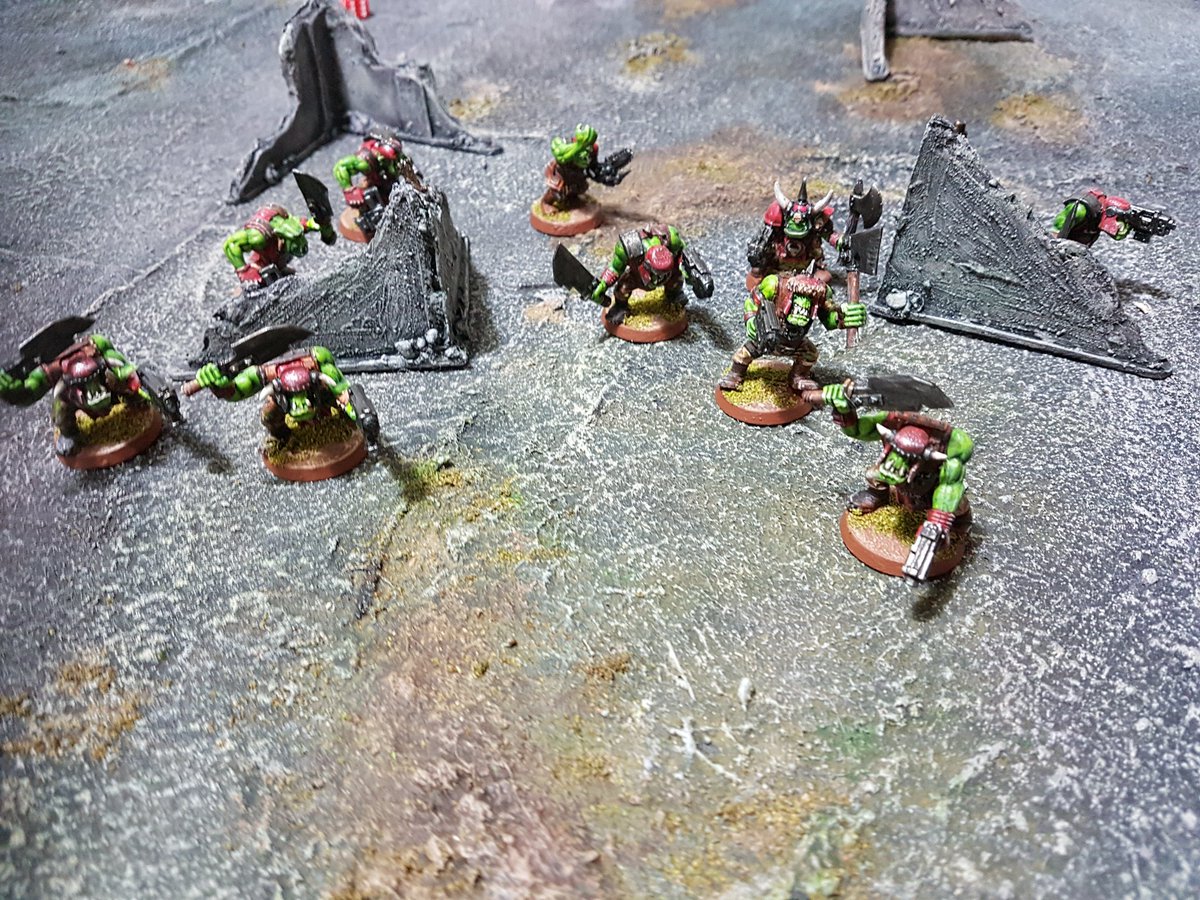 These ladz will be rolling out against the marines for Game 2 of our Armageddon mini- campaign – see you soon for that one!

Brother Lorenzio tapped his comm-link again and muttered a curse. No matter what he did, he couldn’t tune out the sibilant high frequency pulsating that he would almost swear sounded like some form of rhythmic high pitched bell… He put it out if his mind as the sonorous voice of Brother Sergeant Garcia came across the squad net.

“Stay close, brothers, the enemy is lightly armed but numerous. Brother Fiorian, your flamer to the fore.”

The combat squad clustered behind a ruined wall. Garcia’s voice across the net again – “Close and destroy, brothers. Grenades and flamer, bolter and sword. On me!”

With that, the five Space Marines roared their assent and charged toward their foe..

Welcome to 2019! Over the last few months, Dan & I have been working on a plan to utilise the contents of our accidental 2017 purchase in the manner they were originally intended – recreating the mini campaign in the scenario book included with 1993’s Warhammer 40,000 2nd Edition box set. It’s taken a little while, but now we’ve got the urban board, the ruins, as well as enough Marines and Gretchin to tackle the first scenario in the booklet – “First Blood”.

So, with bellies strained to bursting point with mince pies and mulled wine, we deployed troops (Dan taking the Grots) and had at it!

All in all, a very fun game, fortune went back and forth between the two sides – allowing my flamer marine to lead the advance was a rookie error, as that flamer template against the close packed Gretchin would have been carnage!

A few criticisms – why (oh WHY OH WHY OH WHY…) must I move and then shoot? Why can’t I shoot and then move? And why phases????? It just seems unnecessary unwieldy complication…

But overall, it was a giggle, and while there are definitely better systems out there, 2nd Ed 40k is genuinely FUN, nostalgia angle entirely aside. Next scenario will be soon, just as soon as the frankly spectacular hangovers Dan and I are currently nursing decline to more manageable levels. In the meantime, happy new year and a prosperous 2019!