Right, I’m writing this because Dan a) can’t be bothered and b) is clearly a ludicrously talented terrain builder.

Anyway, a bit of background – back in 2016, we came across an eye opening article on DakkaDakka.com by the magnificently talented 3T studios, detailing how to make “Dynamic, Craggy Hills“. We both were struck by the incredibly cinematic beauty of their work and resolved that our stuff would look like that.. one day.. so I sawed off a hardboard rectangle to serve as base, piled paper mache, and chunks of packing polystyrene on board, along with some pebbles and twigs, coated the lot with PVA and and before painting up and flocking. The result was… ok, I suppose, but it was only a few months later when I realised what was bugging me about it – the base.

So Dan scooped up my baby, took it over to his shed with promises of a more organic shaped MDF base, and a few days later produced this:

So there we are, proof positive that Dan is a frankly phenomenal terrain builder and kept that pretty bloody quiet! I’m intrigued to see what he comes up with next…

And if you’re wondering why the name – Robert Kubica, one of our motorsport heroes. His return to F1 might not have been the most successful so far, but we’re rooting for you (and Williams) – and if you want an inspirational story, his is up there… tagged as an F1 star of the future, loses most of an arm in horrific crash, 8 years later makes it back to the top of racing.. tiene cojones, Bobby K. So this terrain piece is for you!

Till next time, stay thrifty and we’ll see you soon 😉

Oh, the jokes just write themselves 😉

Anyway, in the spirit of thrifty wargaming, here are some “beta test” rules for the Kugelpanzers in the last post – this is what we’ll be using in the next couple of games, let us know how you get on and please do post feedback in the comments section.

Armour – 16 (all over, due to spherical nature of the tank)

Instead of firing individually, the vehicle may combine all three laser cannons to produce one focused shot:

Combine the targeter bonus (so +3 to hit)

The vehicle may combine fire with up to two other Ocelots within 12 cm of it, each additional vehicle doubling the penetration and adding an additional +1 to hit (maximum +4) .

Stay thrifty out there and happy wargaming!

So the last time we visited 1950s Germany (1956 to be precise), the villainous Holy Soviet Empire had overrun the crucial Skalk Point plasma reactor facility – and with Buffalo 2-7 having suffered close to 100% casualties (not for the first time in their careers), it’s time for the League of European Nations to step up and take care of business!

And to do this, they’re going to need every bit of help they can get – so far, I’ve got an infantry platoon and a support laser painted up, and that’s not going to be enough to unseat Task Force Polikarpov!

So first out of the blocks, an idea I’ve been kicking around for a while – the infamous Kugelpanzer, or ball tank. These things seem to be staple of retro sci-fi, without really having a defined role, so I figured they could work as an armoured recon troop- with a bit of a twist! These things would be packing laser cannons- three each. These will be capable of rapid fire against infantry and light vehicles, but by combining their fire together they will be able to fire a single high intensity laser blast capable of obliterating even a Soviet Colossus or IS-6 Rampager!

It’s actually a bit of a challenge “feeling out” the character of this army – sandwiched between the lumbering juggernaut of the Holy Soviet Army and the elite, hi tech but short on numbers feel of the Atlantic Alliance, it’s a bit of a challenge to find where the European League should sit. So we’ve gone for a slightly ragtag, heterogenous feel – bizarre clunky specialised units that are very good at one thing, but suck at everything else. Kind of like a 1950’s Eldar to the AA’s Space Marines or HSE Guard, if you’ll allow the metaphor.

Anyway, enough waffle – on to the build!

We begin with (drumroll please)…. ping pong balls! A bag of 20 off eBay for a couple of quid. I googled “ping pong ball diameter” – seriously – and discovered that international regulations – seriously – specify 40mm. Thus reassured, I cut out 40mm x 15mm strips of thin card which I aligned as centrally as possible. These would serve as mounts for the tracks, which I cut as 5mm wide strips from IDE cables (a trick learned from master scratchbuilder Zrunelord)

After that, all that remained were the guns! 3 laser cannons per tank, one per side and a centrally mounted top one. I made these by chopping up a 1cm length of cocktail straw and then supergluing a 5mm length of drinking straw to each end, like so:

A coat of white primer and a base coat of Crafter’s Choice Fawn later, I added lines of brown and Vallejo Russian Green (irony!) to create the WW2 “Dunkelgelb” style camouflage pattern. The whole thing then gt a thinned wash of brown ink, an unthinned in wash of Vallejo Smokey Ink in the crevices, before a final drybrush with bine craft paint to catch the rivets. I applied sponge weathering using both black and gun metal, and then knocked up a texture paste from sand, PVA and dark brown paint – this got smeared around the tracks before being drybrushed with a lighter brown and blended around the tracks (in truth I think I got a bit carried away here, but oh well – northern Europe can get pretty muddy..) 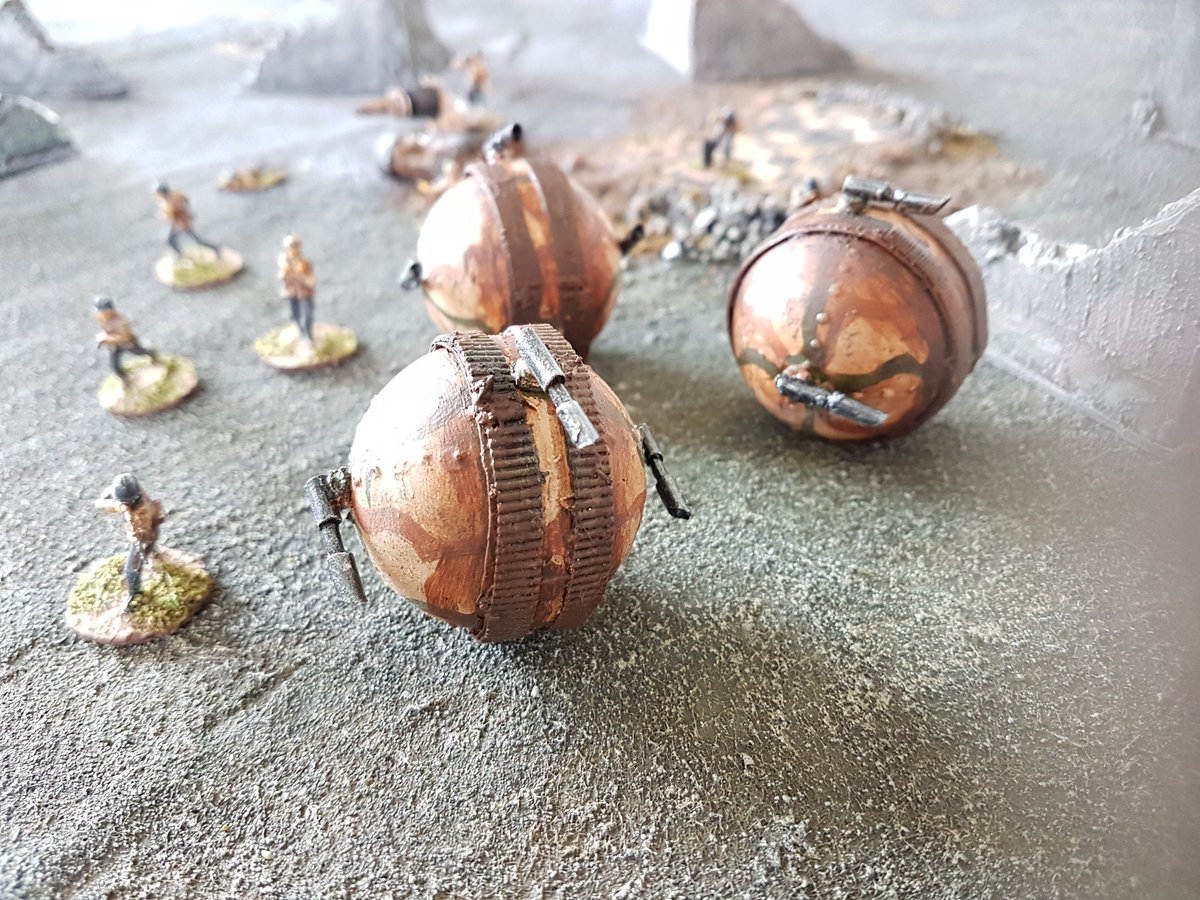 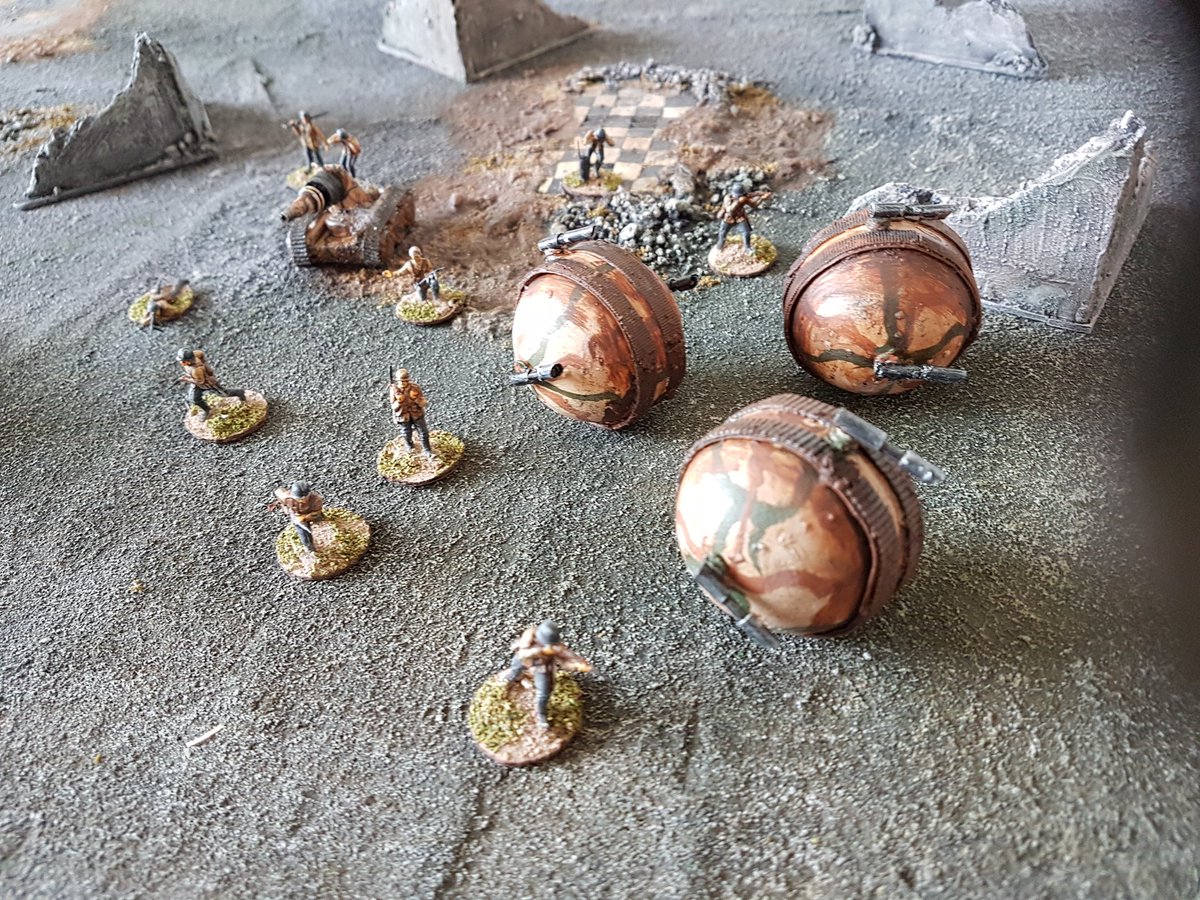 Looking forward to getting these on the table soon – can they beat the fate of all painted models, or will they cover themselves with glory taking down Stompy Uncle Joe? Stay tuned, stay thrifty, see you soon!