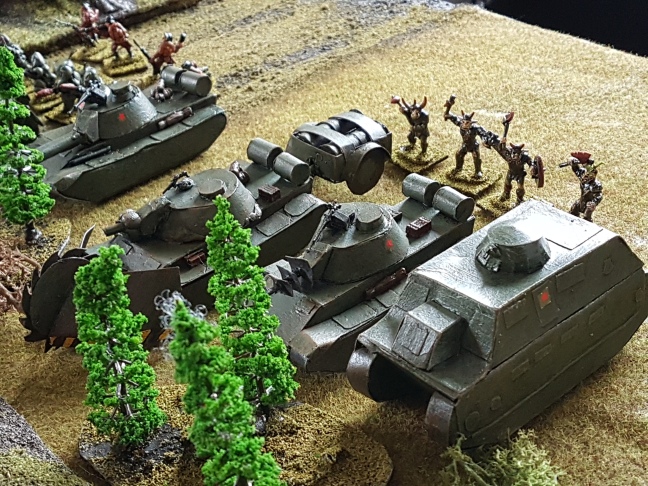 (Might as well get this out of the way straight away)

The ARPANet alarm barked in Lt. Grant’s Humvee, jarring the tired officer from a much needed nap. Code Red. Urgent. He swore softly and lit a cigarette as the dashboard communications panel pulsed into life.

The news was unwelcome. Heavy Soviet activity in his sector – no mistaking the signs. Ivan was preparing a major attack and the forward logistics/ R & D installation Grant and his command had been assigned to secure was almost certainly the target. Grant cursed the Soviet remote viewers who had penetrated the most sophisticated Allied shielding to learn of this facility’s location. He clicked his communicator.

Deep in the heart of Central Germany, a forward Allied R & D/ logistics hub is about to be attacked by an overwhelming Holy Soviet Army force. Buffalo 2-7 have to hold the line against an Endless Horde (more on that in a moment) long enough for the scientists and their research to be evacuated.

Evacuation – there are 20+ scientists (I never did count them!)

Now, this Endless Horde – every time a Holy Soviet unit (vehicle or infantry squad) was completely destroyed, it would respawn in it’s deployment zone, which would stretch 10cm further forward each turn). Infantry squads would rush forward to maintain their platoon coherency, representing reinforcements rushing forward to find their officer, and then behave normally.

We deployed along the narrow table edge, the Soviets having to run the gauntlet of Alliance fire to capture the scientists for their own nefarious purposes… 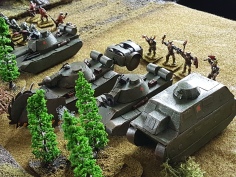 The Soviets ready to storm the station.. 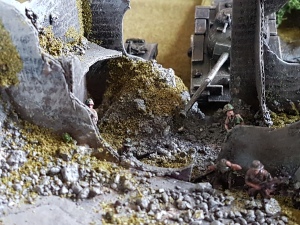 The Allies hunker down…

(sorry for the lack of Turn 4 pics, we were quite busy drinking)

Wow. That was close. Dan’s hordes had almost completely wiped out plucky little Bffalo 2-7.. I had a grand total of 3 infantry models and one APC capable of moving. Everything else – everything else – was dead or destroyed. And yet.. we made it.

Fundamentally, the plan was sound, although my big mistake was in deployment – a mostly anti-infantry force held the right flank, anti-tank on the left… and Dan came at me the other way around! was a hell of a blast though, reminded me of the climactic battle at the end of Platoon with the Alliance positions crumbling under the endless hordes of Soviets and their lethal artillery.

In this instance though, Dan agreed that he played it too much like a conventional game and focused on destroying my forces, gaining tactical advantages etc, when in fact he should have just piled everything forward and gone for it. Too clever for his own good this time! It has to be said, the lack of a fast mobile unit for the Holy Soviet Army really hurt them this time – the implacable wall of steel rolled forward, with it’s firestorm of death and destruction, but just not quite fast enough.

Still, a hell of a game – and a great way to shoot my previous rant in the foot. This may well not have been realistic, but it was loads of fun. Dan wants to build a giant Soviet robot for the next one, and I want to let him – I’m going to build an Avrocar gunship! Screw the statistics, let’s play 🙂

So basically – 6’x4′ in 1/72 = a Premier League club football field. Hmm. And we’re supposed to believe an epic struggle between company level units with heavy weapons and tanks?

For you 28mm chaps – you poor deluded fools 😉 – it gets even worse. 28Mm is officially 1/48, meaning you guys cram all your 40k Imperial Guard, Ork or Tyranid horde onto 86.4 by 57.6 metres. Usain Bolt can run the length of your table in less than ten seconds – it’s fair to say a Space Marine probably can too.

However, let me throw an interesting statistic your way – during the course of the 21st century and the endless “War On Terror”, most infantry firefights take place at ranges of 100m or less, making the standard 1/72, 15mm and even 28mm scales actually not bad at simulating skirmishes.

But that’s just it. Skirmishes. A platoon or so. Anything beyond that – silly.

So, with that revelation in mind, it occurred to me that when it comes to Apocalypse: Earth, trying to build a huge army with massive superheavy units is completely missing the point. So, from now on, nothing heavier than an MBT. No apocalyptic monsters, no titanic giant robots, no massive flying gunships – we’ll save them for A: E’s 6mm cousin!

And this leads to an interesting idea – seeing as we focus on keeping armies cheap and affordable through use of 1/72 infantry and scratchbuilt vehicles, maybe our player base won’t consist of Soviet Empire or Atlantic Alliance or FutureCorp or Brotherhood players – maybe most players will end up with a bit of everything. As we’re not in the business of selling miniatures, that works out great as far as we’re concerned!

Now 6mm – 1/300… that means we’ve got 540 x 360 metres to play with. Now THIS is where we want the crazy stuff – and we’re planning A: E Armageddon, the battalion level wargame where we crank the crazy up to 11! So what would you guys like to see? Let us know, the more mental the better!