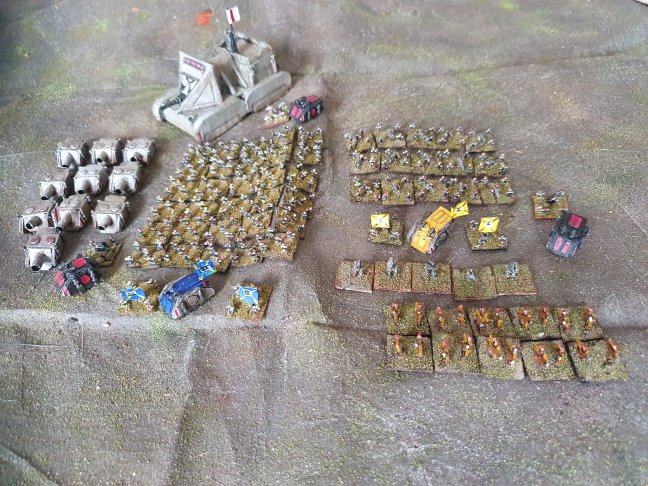 This was supposed to be an easy one….

So, back in the days of M2 992 when the 2nd edition of Space Marine came out, supplemented by Armies Of The Imperium, the Guard got a few tricks that haven’t endured to the present day. Crucially – as GW only had a limited number of model kits available – the Rhino was a standardised piece of kit available to Guard and Astartes forces alike.

Although your common or garden Guardsman is expected to footslog into battle and basically stand and die, under 2nd Ed Epic all Guard company HQs were all issued with Rhinos and furthermore each Guard company got issued a Commissar – essentially an independent morale/ political officer type, this is a useful unit able to act independently, handy in close combat and crucially able to reinforce the slightly inflexible Guard command structure by relaying orders and taking command over Guard units left leaderless. These units were free, and looked to be hugely useful – so in order to make the Granny Grating Guard a fully “street legal” playable force under 2nd Edition, I needed to make some.

Infantry were a piece of cake – usual cross shapes, with a slight alteration for the Commissar to represent his chainsword and a little smear of greenstuff for his cape. I painted the Guardsmen escorting him in the usual manner, while the Commissars themselves got funky red caps with black capes (I know, capes are pretty wizard) and shiny Vallejo Mithril Silver chainswords.

The Rhinos were a slightly trickier affair – I went back to the Vindicators from back in… 2019? The Before Times, the Long Long Ago and copied the dimensions, just leaving off the reinforcement glacis plate and unfeasibly large gun and adding a couple of hatches from thin cardboard (the circular ones were done with my hole punch), and the details of boltguns and exhausts were done with granny grating offcuts. I’ve got into a new technique with these – holding them with tweezers und using a mix of superglue and tacky PVA. The superglue provides the initial hold, the PVA provides are stringer more flexible bond after it dries.

I primed everything white because 1992, and painted with the same pattern of Granite Dust house paint/ Green Wash/ Brown wash/ Black wash/ Granite Dust Drybrush for the uniform bits. Craft black for the commissars, and following the “Assault On Barbarius” battle report forces I added yellow and blue stripes for the HQ vehicles.

Back when I last gave this project some love, John@justneedsvarnish mentioned that they could use some flags… now, I could have got all smug and snarky -“Oh yes, everyone knows that all sci-fi armies use banners to denote their valuable command units, totally tactically sound” – except of course, that he’s dead right. You can’t do ’90s GW without flags. So I copied the infantry company HQ flags as best I could onto paper and superglued them onto poles made from about 15mm of straightened out, snipped up paperclip.. and I also added some flags to the HQ units of the other companies and the Leviathan, using the white/red/white army ID symbol the army uses on its’ right front quarters.

So with that done, pics:

So that gets us to:

So that’s a cool 2250pts of Epic to throw down with, not enough for a BIG big game, but enough for a decent enough scuffle – unfortunately Skinflint HQ is out of action for the moment (redecoration), but it’s nice to know the Hazzard PDF can throw something into the field to combat Waaagh- Bozzhog! 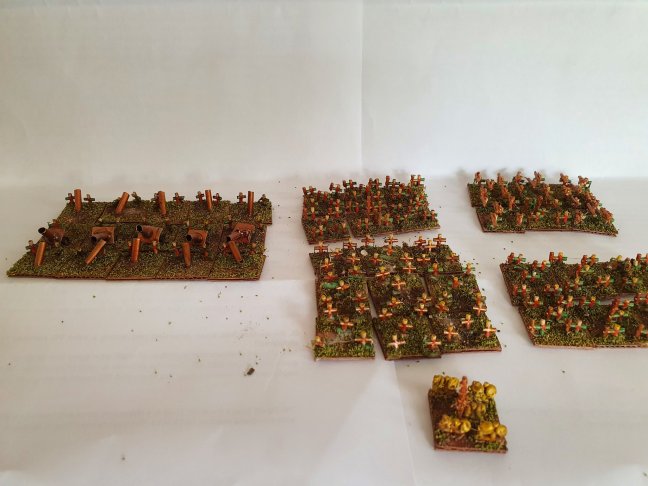 It’s been a while, this. You ever get those project ideas which come really quickly but then take forever to get stuck into? This was one of those..

..which makes it all the sweeter to be finally able to show it off!

After Dan converted me to the Church of Granny Grating with his adorable Imperial Guard, I’ve fallen hook line and sinker for the charm of the technique, and after he decided to theme his army around the force featured in the 1992 (1993?) White Dwarf Battle Report, I decided to undertake a similar project based around the Squat force that fought against Ghazgkull Thraka’s Ork horde-

..and then this happened!

Now, the new look Squats are very much a source of controversy, but this army is firmly old school early 90s classic feel. So, to the pics!

So there we are, first tranche complete! Next up I’ve got a Guild Biker force to put together, and I’ve got some ideas for that… Granny grating is this stuff, so as you can see it’s an absolute steal, and one sheet has done all these Squats, Dan’s Imperial Guard, my Star Wars armies and there’s still a fair bit left!

Hopefully this has inspired you to give this technique a go – we can’t claim to have invented it, and sadly the original creator seems to have disappeared – this is as close a link as I could find. If anyone knows anything more, please let us know!

Stay safe and thrifty out there, and Slavia Ukrainia!