EDIT – I began this post before Christmas, but life kind of got in the way.. hope you enjoy this belated post!

Two sleeps til Christmas – but amidst the festive lunacy, we’ve still found time to complete a project! These lads are one of the first steps to having the Epic Imperial Guard Army I always wanted but could never (and still can’t afford)..

Anyone interested in the build process should check here first, a this post is going to be all about the paintjob and finishing off the last steps of this project. Now, I’d struggled with a camo pattern for these lads for a while, and regular visitors to the blog might notice some changes since their last appearance.. So I’d hummed and hawwed about how to paint them and eventually decided on an 80’s BAOR/ NATO inspired three tone camo. A few simple steps:

Detail with Vallejo US Olive Drab

Pin wash with Vallejo black ink, and wash the metallics. 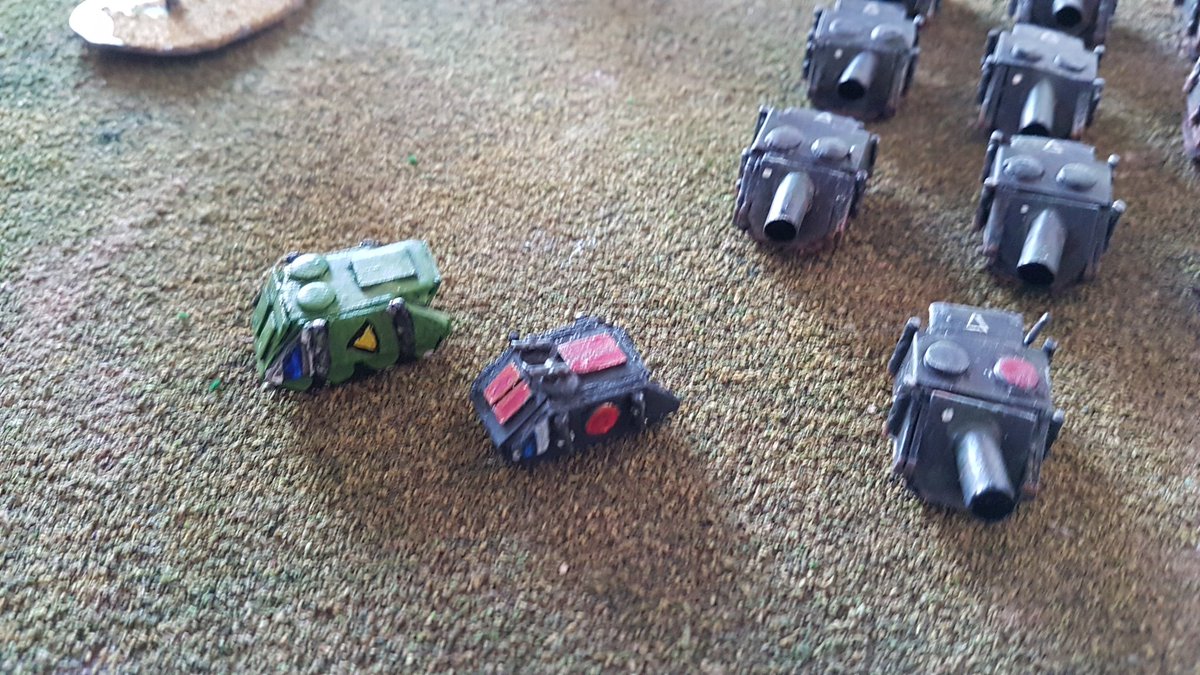 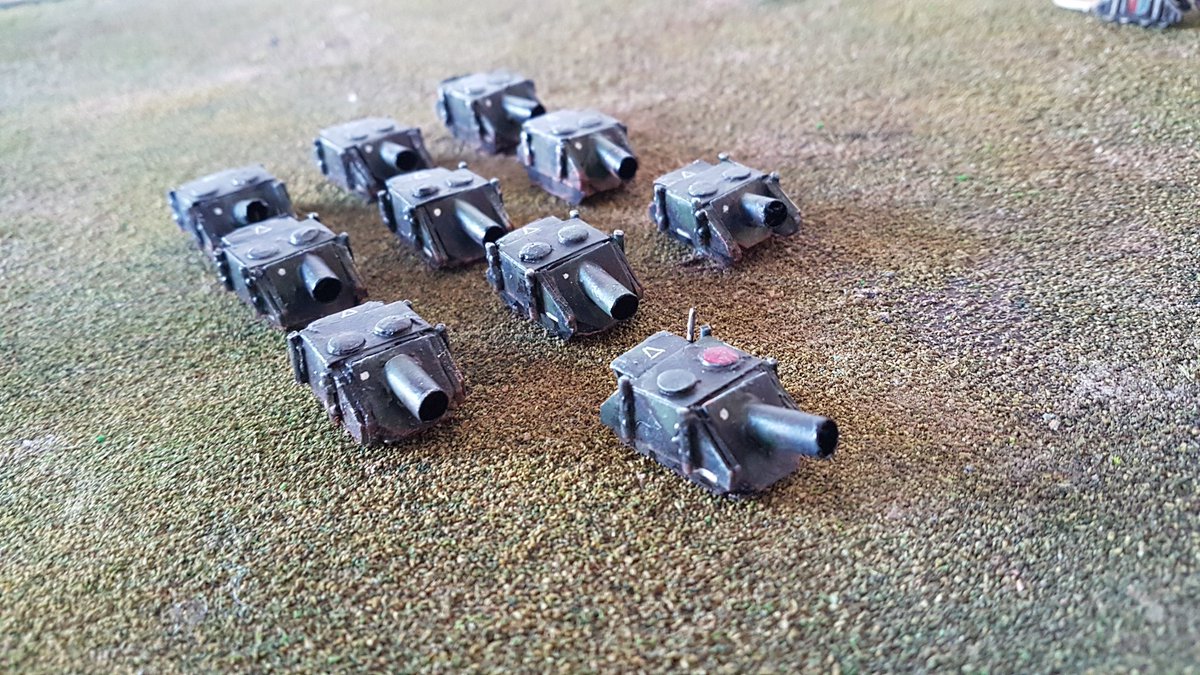 These lads got a lashing over on Dakkadakka, but TMP members seemed to dig them, and personally I’m quite pleased – they’re a bit darker and more indistinct than I intended, but it’s a relatively “believable” colour scheme and the tactical symbols (which I copied from Google Image search for “FV432 camouflage”) give them a bit of life. They’re sure as hell not perfect, but from two feet away they look pretty good, and I’m looking forward to getting them on the table!

Meantime, Happy Christmas to one and all out there in the blogosphere, here’s wishing you all a fantastic Christmas and New Year!

You find me in a philosophical mood. Maybe it’s the time of year, maybe it’s the copious amount of whiskey flowing through my veins in an attempt to shift this cold I’ve acquired…

In any case, I’ve found myself surfing a few forums like TMP and Dakka and coming across rafts of… debate, let’s call it, about the state of Games Workshop and 40k in particular. Broken units, no balance, people furious about their favourite unit suddenly being made overpowered or underpowered or invalidated altogether. Then you have players of games such as Adeptus Titanicus annoyed about the lack of “support” – ie, new stuff – they’re getting (to be fair, they’ve got a point – GW’s Facebook post about the box of new Warlord Titan weapons “will have a Warlord in it too” was such an utterly hilarious and terrible marketing/PR decision that you can’t help wondering if they’ve been moonlighting for Boris Johnson’s campaign team)

Anyway it got me thinking. If you “support” a game, that means you expand the setting, you add new stuff – we’ve got similar things planned for Apocalypse: Earth, delving deeper into each faction’s history and more esoteric units, but seeing as it’s just the two of us writing it all and one of us is holed up with a cold it’s safe to say we won’t be releasing anything anytime soon. Now this is all well and good up to a point, but if you’re GW and your business model depends on releasing New Stuff year on year, at some point you’re going to overload your core system – the rules can only take so many New Things.

Why? Two reasons: Granularity. 40K & Age Of Sigmar are built round a D6 system – nothing inherently wrong with that, our game is too – but it does put a limit on the number of variables a unit can have. Particularly in the latest (8th) edition where things like vehicle fire arcs and armour facings have been done away with. Eventually you’re going to introduce New Things that are statistically identical to the Old Things. This brings me to the second consideration: GW is fundamentally a model company. Even the most diehard 40k/ AOS fan is going to buy waaaaaaay more models than they are books. Their monthly magazine, White Dwarf, is primarily a marketing tool to sell more of the latest New Thing (yes, there are useful and interesting articles in there but at it’s heart it’s a GW product with the primary function of selling more GW products) – but for a player, there has to be a reason to by the New Thing. It has to be functionally better than the Old Thing it goes alongside or replaces – for example, why buy a new Invictor Tactical Warsuit model if the Dreadnought that you’ve already got does the same job? And this inevitably leads to power creep, as each faction gets New Stuff to counter the other guys’ New Stuff to the point where your basic grunt is utterly useless, just there to die on Turn 1. At which point the games has to reset and hello, New Edition. And so the cycle continues.

Of course, if GW doesn’t sell new models and bring out new things… well, Duncan, Peachy and co have bills to pay. The stores don’t heat and light themselves. Without the constant commercial imperative powering everything then the company would fold and there’s no 40k for any of us (never mind the hundreds of people out of a job and the death of one of the few business success stories the UK can be proud of). So GW really is a victim of it’s own success – failure to release significant quantities of New Stuff means that players accustomed to this level of “support” feel they’ve been abandoned, whereas “support” past a certain point pushes the game into power creep where only the newest and shiniest of models are worth the cost. Not to mention the constant slew of codexes, Chapter Approved and FAQ books… I read (admittedly on Dakka, so this may not be 100% accurate) that there are now 144 documents needed for playing 40k. Now I’m sure this is an exaggeration, but really, more than 2-3 books is surely nuts.

Is there a solution? I think no – not for GW, anyway, they can’t stop expanding and evolving their models and rules. If they stop, they die. No new models/ rules? What do you put in White Dwarf this month then? One Page Rules do a good job of combatting this, but I can’t see GW going down that route, it wouldn’t square with their production values and codex-based business model.

For us, we’re doing the core book for each system and eventually a sourcebook for each faction and that’s it, anything else we think of we’ll add to the blog and make available as a free download (like the Kugelpanzers back in April).

So there we have it, bit of a ramble this month, but I’m full of whiskey and bird flu and wanted to get this off my chest – what are your thoughts on the thorny issue of “support” for a game? Am I right about the inevitable imbalance of a big name game system like 40k? Do Privateer Press or Fantasy Flight Games have these issues? Drop a comment and let us know – meantime, stay thrifty out there and see you again soon!