And this week we’re doing – Age Of Sigmar! It’s fair to say that this game has had a controversial reception – blowing up the Warhammer World, renaming elves, dwarves, orcs and goblins for ease of GW trademarking etc., and to the casual observer (such as we) the replacement fluff seemed pretty vague and silly, and above all unrelatable. The Warhammer World may have been a dangerous place, but it was still one where you could imagine ordinary people living, working, eating, sleeping, and using the toilet. The AoS fluff was very high fantasy myth and legend, lacking the grit that let you believe in the stories you were telling on the battlefield. Plus there were a great many silly rules in the original, no real points structure or levelling mechanics and the whole thing just felt rushed and sloppy.

At least, that’s the way it seemed to us. But that was during the Age of Kirby. As GW have changed management, they really do seem to be making an effort to engage and put out well thought out balanced games – and in the case of AoS, making the rules available for free.

We like that word. And so – with AoS 2 now out, high time we dipped a toe in the murky AoS waters and found out what was what.

Of all the WHFB/ AoS races, I’ve always had a thing for Skaven. Giant chittering mutant rats lurking in the sewers, waiting to strike in the darkness.. like Orcs but more cunning, less brutal.. like Goblins but furry.. and then there’s all the Clan Skryre craziness..

So for me, when we got into AoS I had to take this opportunity to start up a Skaven army. But of course – GW prices. They make lovely stuff, but WOW is it expensive – can’t run a Ferrari on a Vauxhall income! (and the minor issue of all our terrain being scaled for 1/72). 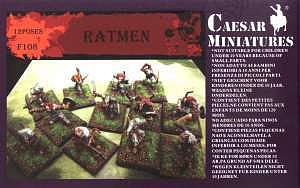 Step forward Caesar (or MiniKnight, there seems to be some confusion on the box) Ratmen – 1/72 fantasy absolutely-not-Skaven, 39 figures and 11 poses to a box. My first box cost me roughly a tenner, postage included – and once they arrived, I fell so head over heels I rounded up every box I could find – three more, for a shade under a tenner a piece. Result – everything I need for one formidable Skaven army for the price of three Stormfiends.

So far I’ve managed to get enough painted up to field a decent little warband, and they got their first licks in against a Freeguild patrol a few days ago – the Skaven warlord took down the Freeguild general in grand style and the wee furry chaps just had the measure of the Guard in close combat, managing to pick them off in dribs and drabs.

I’ve gone with the notion that seniority is denoted by darker fur, so the Skavenslaves are a lighter brown than the Clanrats, who in turn are lighter than the Plague Monks, etc. Having had a little experience painting at this scale now, I’m more than ever convinced that the right way to do it is to start light (white primer) and wash down rather than starting dark and highlighting up. This is because washes are so much thinner- at this smaller scale, layering highlights will ruin all the detail, as well as taking far longer. That said, I usually finish things off with a very light bone drybrush to catch the highlights.

For basing, I used our now standard technique of thick cardstock (20mm square), covered in PVA, dunked in a pot of Garage Floor Dust (TM), and then a sparse overlay of flock for contrast. Edge with brown, spray with matt varnish and you’re good to go!

Now, as well as being Skaven for AoS and any forays into it’s predecessor, Warhammer Fantasy, these chaps will also be appearing in our own fantasy/ steampunk setting – Hyperian Wars!

The Virum Nascii – Men Of Vermin

The shadow in the corner? The rustle in the rafters? That presence you feel lurking in the corner of your room as you go to sleep? Most of the time it’s just your imagination.

Most of the time.

But sometimes – every once in a while – it’s the Ratman. The Vermin Kin. The Virum Nascii. Many years before mankind came to Hyperia, there were some within the Stoc’d who grew weary of the prohibitions on Vril usage, on biology, on experimentation. Cast out and labelled renegade by his peers, a once noble Stoc’d biologician dug deep beyond the frontiers of his races’ realms, deep towards the core of Hyperia – deep towards the essence of pure, life giving Vril – and began to create a slave race, a race that would do his bidding without question, and eventually make him master of our world.

But life does not always abide by the rules we want it to. The common rat joined him on his journey – and the Vril wrought its magic, sought by design or not. With the biologician’s attention focused on the acquisition of precious Vril and designs of vengeance, the rats grew in intelligence and stature, until they were able to overpower him and his retinue. Now they live in the darkest corners of Hyperia, pulling the unwary down into their shadowy empire. When you meet them in combat, beware – they may not have the martial code that distinguishes us, the Eal’va, the Stoc’d or even the Orca, but they are a deadly opponent, every bit as fearful as the Terrors of the Dead That’s it for now, but as the Hyperian Wars fluff develops you bet the Virum Nascii will be along for the ride. Check back soon, stay thrifty out there!

Oh, and a PS regarding the title – we haven’t gone all EDL on you, the reference is this: