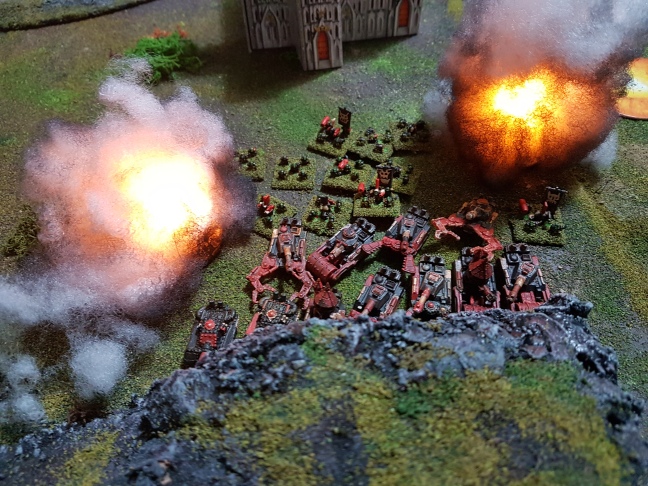 Seasons greetings all! It’s becoming increasingly clear that with the onset of age, the passage of time speeds up to frankly alarming proportions. I’d swear blind that not five minutes ago Dan & I were raising a glass after a cracking game of the GW classic Space Marine (where the Redeemers Space Marine Chapter fought a valiant action against the villainous Ork hordes of Waaaagh-Bozzhog), and then I check the calendar and discover it’s actually a YEAR.

I know. Shocking. And HIGH time we remedied things.

Back in January, my Redeemers got themselves all tidied up and based, and organised into a 4000pt force and not long afterwards I got busy with the hot glue, cardboard and drinking straws and turned a piece of Christmas present packaging into a majestic Leviathan superheavy command vehicle for the Hazzard 1977th Imperial Guard regiment..

As it stands, said Leviathan is the the sole Epic scale member of the 1977th, so it would be the Redeemers going to bat again with a token measure of Guard support.. The list looked like this:

Now, as some of you may recall, we screwed the maths up a little last time out, so we were determined that this time we were going to get things right, so army cards were checked, double checked and checked again for good measure – this time before the beers came out. For WAAAGH-BOZZHOG, Dan was able to bring out all three of his painted up Ork clans, plus the mighty Slasher that had wrought so much carnage last time out:

We rolled up a health mix of terrain, including several towns – too many, in fact for the buildings we had supplied in the box so we broke out some of the home made sci-fi terrain we made earlier on in the year (which never made the blog- might have to remedy that) to fill in the gaps. This worked out quite nicely – the Orks would be rushing to loot the vast giga-storehouses of Hazzard’s finest export moonshine, certainly a mission which would require the Redeemer’s immediate attention!

For what seems like the first time in living memory, Dan won the deployment roll off and opted for the southern table edge with a greater concentration of objectives, leaving the Redeemers slightly on the back foot – but not to worry, the Emperor’s finest would save the day and ensure that Imperial liquor cabinets would not run dry on this most festive of occasions! First to 50 Victory Points would be the winner…

Bugger, I wanted that side! Right, never mind, a Marine is nothing if not adaptable.. looking at the terrain and bearing in mind the experience of the previous game, my rough plan was to get the Leviathan, Devastators, Warlord and Whirlwinds into position and firing as quickly as possible to whittle down the Ork numbers and counterattack with the Veterans and Terminators when the time was right. Scouts would sit on the backfield objective and protect the Whirlwinds while the Land Raiders would act as a fire brigade.

To this end, I placed the armour and the Leviathan covering the open ground on the right flank, Devastators would advance to capture objectives 2 and 3 and plaster fire into the oncoming hordes. I debated what to do with my Veterans and Terminators and eventually decided on something audacious – Veterans would charge forward onto Objective 6 and use that either to springboard an assault or pull back in a fighting retreat onto the Devastator’s guns, while the Terminators would ambush any unwary stragglers. With this rough plan in mind, the Redeemers and the PDF crew of the Leviathan finished their final weapons checks and turned to face the enemy..

Haha, for once the dice gods favour me! Right, my basic strategy with this army was three pronged – Evil Sunz would loop around and charge in, pinning the main enemy unit in close combat, before pulling out and leaving the central column of heavier but slower moving Goffs to finish them off. Meanwhile the Bad Moons and the Slasher wold provide covering fire and if any close combat targets of opportunity presented themselves, the Slasher would take care of them. Following this, Bad Moons deployed onto the hill with orders to advance onto objective 7 and 5, while the Goffs would charge “hey diddle diddle, straight up the middle” with the intent of pulverising any Imperial unit foolish enough to stand in our way, and the Evil Sunz would secure Objectives 2 and 3. From there – we’d see what happened..

The Imperials won the initiative and forced the Orks to move first. This was somewhat intimdating as the Bad Moons and Slasher grabbed three objectives on the Ork right, while the Evil Sunz floored their throttles and hurtled toward the towering peaks of Objective 3, and the Goffs bellowed a mighty WAAAAAAGH, charging through the buildings in the centre towards the hated humiez!

The turn began with a mighty WAAAAGH and the roar of greenskin V8s as the Orks won the initiative and opted to move first. A wave of red and green engulfed the Devastators on the commanding heights of Objective 3 – hunkered down on First Fire orders, the Marines grimly zeroed their sights, waiting until they saw reds of their enemies’ eyes..

The initiative stayed with the Orks for this one, who opted to move first. The Evil Sunz assault had been a costly failure, but with unexpected good fortune on the other flank – wiping out an entire company of valuable Redeemer veterans – would we be able to refocus and redeploy to take advantage?

With the Warlord down, the Imperial left flank was reduced to a few stands of Terminators, but equally the Ork left had crumbled and the Bad Moons had taken heavy casualties to the point where they were perilously close to breaking – even at this stage, it was anyone’s game!

The Orks won the initiative and opted for a bold, aggressive strategy..

The Imperial side won the initiative and opted to go first – with the remaining Orks running wild, only an equally aggressive strategy could pull things back!

What a game! Right until the end it could have gone either way, especially after the Warlord disintegrated (as he seems wont to do every game).. and the ballsy charge of the Goffs and the Slasher almost swung it. Had the Evil Sunz assault gone better it would have been all over for the Marines, but Dan admitted to getting to unfocused, trying to capture Objective 2 as well as carry the assault. A bit more concentration of force would have enveloped the Devastators and most likely annihilated them. And what the hell was I thinking putting my entire Veteran company in the warehouse?? I may as well have left them at home!

The Goffs are a weird bunch, clumping infantry and tanks together means something very hard hitting but at the same time hard to position right, and it was only really Turn 4 when they were in position to do something significant – and by then they’d suffered enough casualties to have broken. Dan’s going to try mounting them in Battlewagons next time… ulp.

Most Valued Player for Dan was undoubtedly the Slasher, 600 pts but chewed it’s way through 1850 pts of Marines and Titan – nearly half my force! For me, I was impressed by the Leviathan, it’s long range cannon let me put the hurt on the Bad Moons from the opposite end of the table, and in the end that helped push us over the line.

So while we mourn our Veteran brethren and Warlord (and Scouts.. and Whirlwinds.. and Dan managed to kill a stand of Terminators to break them too..) the Leviathan leads a battered taskforce of Land Raiders and Devastators to secure the remaining precious stocks of Luna Luceat liquor. The Imperial Festive Season must go on!